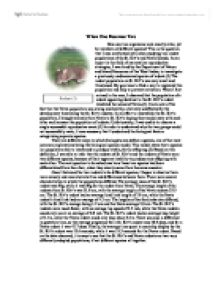 When One Becomes Two

When One Becomes Two How can two organisms look exactly alike, yet be members of different species? This is the question that I was confronted with when studying two rodent populations of the St. Kitt's and Nevis Islands. As an expert in the field of mammalian reproductive strategies, I was hired by the Department of Nature and Island Resources of the West Indies, to investigate a previously undiscovered species of rodent.(1) The rodent population on St. Kitt's was very small and threatened. My goal was to find a way to replenish this population and help to prevent extinction. When I first arrived in the area, I observed that the population of a rodent appearing identical to the St. Kitt's rodent inhabited the island of Nevis.(1) I took note of the fact that the Nevis population was strong and healthy, relatively unaffected by the development threatening the St. Kitt's rodents. In an effort to reestablish the St. Kitt's population, I brought animals from Nevis to St. Kitt's hoping they would mate with each other and increase the population of rodents. Unfortunately, I was unable to observe a single successful reproductive event.(1) ...read more.

Based on my observations and research, I believe that the microevolutionary changes that occurred in the two populations of rodents were mutation and natural selection. When random mutations occur in gametes, the offspring produced by the gametes will have different characteristics than other offspring. If the mutation is advantageous to the individual, natural selection can occur.(2) Natural selection is dependent upon genetic variation. Because of the variation present in all populations, certain individuals have more advantageous characteristics than other individuals. These advantaged individuals are more likely to survive to reproducing age and to pass on their characteristics to their offspring, while the other individuals not possessing the advantageous characteristic will find it more difficult to obtain the necessities of life, and reproduce. Over several generations, the majority of the population will possess the advantageous trait, and those more possessing it will have died off.(2) In the case of the rodents on the islands, mutations and natural selection created differences in the two species. On the island of St. Kitt's, about 20, 000 years ago, there was a wolf-like predator that preyed on the rodents. ...read more.

The rodents of St. Kitt's were naturally selected by a predator, and their microevolutionary changes accumulated to create a new species, no longer capable of mating with the parent species of Nevis. Once the two populations were recombined, they remained unable to produce viable, fertile offspring because of different reproductive isolations. The rodents populations from the two islands are reproductively isolated behaviourally. Behavioural isolation involves the difference courtship rituals used by animals to attract a mate. The rodents of St. Kitt's have a much shorter courtship ritual than the rodents on Nevis, and the behaviour would be unlikely to attract an individual from the other species. This isolation furthers the blockage of gene flow between the two populations, and keeps the gene pools of the populations separate. In order to understand why the two rodent populations could not mate with each other, I needed to understand microevolution, macroevolution, and reproductive isolations. To summarize, the geographic division or allopatric speciation set up the possibility of the creation a new species, and it was the accumulation of the microevolutionary changes in the populations that eventually led to the development of a unique species, some 15, 000 years later. Once the new species had developed, after recombining with the parent species, they could not successfully mate because of the behavioural reproductive isolation. ...read more.