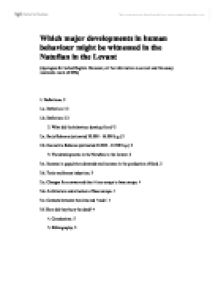 Which major developments in human behaviour might be witnessed in the Natufian in the Levant (Apologies for halted English. However, all the information is correct and this essay received a mark of 66%) 1. Definitions. 2 1.a. Definition 1 2 1.b. Definition 2 2 2. What did the behaviour develop from? 2 2.a. Early Kebaran (estimated 20.000 - 16.000 b.p.) 2 2.b. Geometric Kebaran (estimated 16.000 - 12.500 b.p.) 2 3. The developments in the Natufian in the Levant. 2 3.a. Increase in population demands and increase in the production of food. 2 3.b. Tools and bones industries. 3 3.c. Changes from caves and short-time camps to base camps. 4 3.d. Architecture and structure of base camps. 4 3.e. Contacts between the sites and �trade�. 4 3.f. How did they bury the dead? 4 4. Conclusions. 5 5. Bibliography. 5 The Natufian is a label for Levantine occupation between 12.500 and 10.000 b.p. (ca. 10.300 - 8500 b.c.), so it is at the end of the epi-paleolithic period (signified by the gathering of wild barley and wheat and by hunting) and at the beginning of the proto-neolithic period (where barley and wheat become domesticated). : The Levant is the coastal plain along the Mediterranean: The western hills and mountains, and their steppe, the Rift system, incl. ...read more.

This may not prove that the Natufians were true agriculturalists, but they carried on experimental activities with plants and animals. They expended large effort in gathering cereal grains, such as wild emmer wheat and wild barley. Therefore it is possible to suggest that cereals were an important constituent of the diet. In the structures of the Natufian, there is evidence of a beginning of storage. The Natufian people simply developed ways to store their cereals and to cultivate them. They were hunting for the major animals in their domesticated area - and began to have animals in domesticated flocks. This is seen by the changing in the size of the animals. They continued hunting the specific animal most commonly in the vicinity of the sites. There seems to have been an increase in the intensity of hunting certain animals at some sites, which implies that man was in close contact with these animals and that he took care to conserve their herds, simply to secure future supply of meat. They seem also to have continued eating birds, fish, nuts, and shellfish, where they were available. The N. people also seem to have kept dogs for hunting. ...read more.

This can be the reason for the found of both primary and secondary burials, both individual and multiple, both with and without burial goods. In the Natufian, humans developed a dwelling lifestyle in a sort of houses halloed into a hillside in some numerous sizes. They began the domestication of certain sorts of animals. They began a production of microlithic tools, weapons and of bone work. And at last there have been findings of the first clay figurines in history. A little trade took place by exchange of some pretty or necessary goods. Bar-Yosef, Ofer The Natufian in the Southern Levant in: The Hilly Flanks and Beyond University of Chicago, 1983 p. 11 - 42 Byrd, Brian F. The Natufian: Settlement Variability and Economic Adaptions in the Levant at the End of the Pleistocene. in: Journal of World Prehistory, vol. 3, No. 2, 1989. Maisels, Charles K. The Emergence of Civilization Routledge, London, 1990 Mellart, J. The Neolithic of the Near East 1975, p. 28 - 39 Moore, Andrew M. T. The First Farmers in the Levant in: The Hilly Flanks and Beyond University of Chicago, 1983, p. 93 - 96 Redman, Charles L. The Rise of Civilization W. H. Freeman & Company, New York, 1978, p. 71 - 87 ...read more.