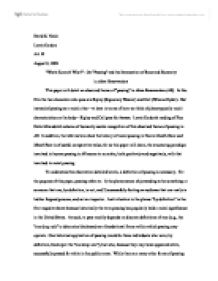 &quot;Who's Zoomin' Who?&quot;: On &quot;Passing&quot; and the Intersection of Race and Humanity in Alien Resurrection

David S. Neale Lewis Gordon AA 10 August 9, 1999 "Who's Zoomin' Who?": On "Passing" and the Intersection of Race and Humanity in Alien Resurrection This paper will detail an observed theme of "passing" in Alien Resurrection (AR). In this film the two characters who pass are Ripley (Sigourney Weaver) and Call (Winona Ryder). But instead of passing as a racial other-at least in terms of how we think of phenotypically racial characteristics on the body-Ripley and Call pass for human. Lewis Gordon's reading of Pico Della Mirandola's scheme of humanity assists recognition of this observed theme of passing in AR. In addition, the information about the history of racial passing in Naomi Zack's Race and Mixed Race is of useful comparative value; for as this paper will show, the structuring paradigm involved in human passing in AR seems to correlate, both positively and negatively, with that involved in racial passing. To understand the observation detailed herein, a definition of passing is necessary. For the purpose of this paper, passing refers to: 1) the phenomenon of pretending to be something or someone that one, by definition, is not; and 2) successfully fooling an audience that one really is his/her feigned persona, and not an imposter. ...read more.

In the Alien saga, the human race has always presumed superiority. Whether they were plotting to subjugate the aliens as a military war force, or plotting to kill them because the alien parasitic reproductive cycle involved the loss of human life, the humans have sought mastery and control over the alien species. These humans, then, make a similar move as Europeans made when venturing into Africa to find slaves. The metaphor of space exploration into the threatening blackness of the unknown, and ultimate colonization of "other-wordly" galactic territories, strongly resonates with European colonialism in the "Dark Continent" of Africa. In addition to this alleged superiority, the humans also harness the ability to revive and clone the lives of past humans, hence the theme of resurrection. And mythologically, the power to resurrect life has always been thought to reside in the hands of gods. So in accordance with Gordon's reading, the humans in AR take on a godlike status, instituting a social hierarchy between them and the aliens, who clearly reside at the bottom given their more animalistic nature. If this is the case, one might subsequently wonder who/what represents humans in the hierarchy? In AR, both the hybrid-or mixed-raced- technologically cloned character of Ripley, and the technologically engineered character of Call, "pass" for human in the stated hierarchy. ...read more.

even seems to identify more with the humans-those at the top of the social hierarchy-inasmuch as she is greatly invested in helping them kill the aliens and find a way off the ship. Indeed, Ripley's allegiance definitely does not lie with the aliens-those at the bottom of the social hierarchy in a parallel position to blacks in the racial paradigm. Even when Ripley realizes that she is a "mommy" of a "mixed race" baby alien, she eschews motherhood like a disease, deceptively showing the baby affection only to have it "aborted" by being sucked out of her life into the nothingness of space. Thus, having used both Gordon and Zack to detail how both Ripley and Call pass for human in AR, there is one more minor twist to this observation of passing. That is, if Ripley and Call pass for human, then the godlike status of the "real" humans essentially has them passing for gods, a particular insight I skirted around but did not explicitly state until now. As a result, a dilemma arises, just as it does with the discrimination of race among our Earthly humans: if in the end so many beings-both "humans" and "gods"-really all look alike as humans anyway, then ranking along a social hierarchy is superfluous. Indeed, the utility of its duality and deception escapes me. ...read more.