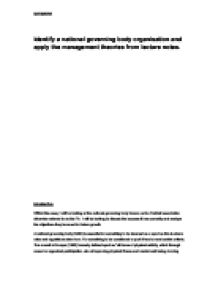 Within this essay I will be looking at the national governing body known as the Football association otherwise referred to as the FA. I will be looking to discuss the success it has currently and analyse the objectives they have set for future growth.

Identify a national governing body organisation and apply the management theories from lecture notes. Introduction Within this essay I will be looking at the national governing body known as the Football association otherwise referred to as the FA. I will be looking to discuss the success it has currently and analyse the objectives they have set for future growth. A national governing body (NGB) is essential for something to be deemed as a sport as this is where rules and regulations stem from. For something to be considered a sport it has to meet certain criteria. The council of Europe (1992) formerly defined sport as "all forms of physical activity, which through casual or organized participation, aim at improving physical fitness and mental well-being, forming social relationships, or obtaining results in competition at all levels" (1992, p.1).This definition is widely used as it is seen to embrace both equity and equality into a sporting context. Football meets this objective and both men's and women's football at all levels fall under the same NGB of the FA This sees equality and diversity being implemented as there is no difference in opinions or marketing strategy and the game can be promoted from one establishment. The FA was founded in 1863 as the governing body for the game of football in England. The FA is responsible for all regulatory aspects of the game in England (The FA, 2011). The Football Association has been a Limited Company since 1903 and, as such, holds an AGM, at which amendments to its rules are agreed by shareholders. ...read more.

This has brought about a requirement for stadiums to be seated to prevent this happening in the future. Security is also evident within stadiums and to make sure that supporters and players are safe and crime is reduced. Another political agenda is the national government and their approach on sport, as it those who produce the funding and decide how much funding will be given to sport. An example of this is the debate whether England should play in Zimbabwe after racial debates were evident and caused conflict between opposing governments (Watt, 2003). Economic is concerned with the financial state of the business and the factors that may affect the organisation both internally and externally. A potential threat to the F.A is the economic situation which England and the world will become vulnerable to as, things such as recessions may limit funding opportunities for the F.A to continue its development. As a result the public may not be able to spend their income on things such as tickets and merchandise this meaning clubs will take in less revenue which may mean they struggle to continue to compete. The FA must think of ways of counteracting this and making football available to all those who would like to participate and support the clubs who may come under financial strain. Another economic point of sport is that it creates employment for people due to such events as the Olympics, Commonwealth games and other sporting events (Watt, 2003). Social is concerned with the inclusion of all people, disregarding of race, culture and background and presenting the ability and chance to participate in football. ...read more.

More than two million people participate in football according to the APS 4 however; it is a notable decline and should be noted by the F.A. The F.A represent their data in a different light as they state on their website that 7 million people in England participate in football in addition to 5 million in schools with over 500,000 volunteers (The FA, 2011). There is a clear difference in recorded participation levels found by the F.A and the APS. This is fundamentally due to how they conduct their research. For this to be generalized and valid there needs to be a general consensus to establish the actual participation levels of football in England.These are the performance indicators that I have chosen to use as they show whether the objectives which the FA set are been met. Conclusion After looking at the FA as an organisation I have noted their objectives and had the chance to judge their level of success based on the results shown from the APS in connection to their objectives stated on the whole sports plan done in 2009. I have noted a slight decline in the number of participants in football since the APS1 was conducted in 2005/6. I feel the FA should take note of this and take steps to counteract this decline as their whole sports plan is geared towards growth and therefore the objectives set out by the FA are not being met. Recommendations to achieve their objectives would be to switch the emphasis on to grass roots level which would see more funding and the development of more coaches and volunteers within the game to make football a continued success in England. ...read more.