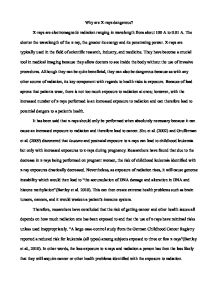 X-rays are typically used in the field of scientific research, industry, and medicine. They have become a crucial tool in medical imaging

Why are X-rays dangerous? X-rays are electromagnetic radiation ranging in wavelength from about 100 A to 0.01 A. The shorter the wavelength of the x-ray, the greater its energy and its penetrating power. X-rays are typically used in the field of scientific research, industry, and medicine. They have become a crucial tool in medical imaging because they allow doctors to see inside the body without the use of invasive procedures. Although they can be quite beneficial, they can also be dangerous because as with any other source of radiation, its key component with regards to health risks is exposure. Because of lead aprons that patients wear, there is not too much exposure to radiation at once; however, with the increased number of x-rays performed is an increased exposure to radiation and can therefore lead to potential dangers to a patient's health. ...read more.

Researchers have found that due to the decrease in x-rays being performed on pregnant women, the risk of childhood leukemia identified with x-ray exposures drastically decreased. Nevertheless, as exposure of radiation rises, it will cause genome instability which would then lead to "the accumulation of DNA damage and alteration in DNA and histone methylation"(Bartley et al. 2010). This can then create extreme health problems such as brain tumors, cancers, and it would weaken a patient's immune system. Therefore, researchers have concluded that the risk of getting cancer and other health issues all depends on how much radiation one has been exposed to and that the use of x-rays have minimal risks unless used inappropriately. ...read more.

Tsushima et al. (2010) have found that an adjustment to the radiation dose for every CT examination will help control radiation exposures to prevent a patient from getting too much unnecessary exposure or getting too little exposure. Moreover, there has been a decreasing use of diagnostic x-rays during pregnancy because of increasing use of diagnostic ultrasound tests which do not pose as a threat to the human health nor the fetus (Shu et al., 2002). X-rays are dangerous because it is an procedure where radiation is exposed but it can only pose harmful if it is occuring several times and if it was being performed unnecessarily. It has also been concluded that the increase of radiation exposure can and will cause harm effects on the body such as cancer. ...read more.