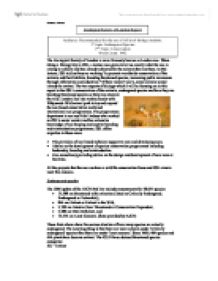 The Zoological Society of London is more famously known as London zoo. When taking a Biology trip to ZSL, a lecture was given to tell us exactly what the zoo is aiming to achieve and has already achieved for the animals that are there. In this lecture, ZSL told us they are working "to promote worldwide conservation of the animals and their habitats, breeding threatened species, increasing public awareness through information and education." If there weren't zoo's, some animals would already be extinct. The two aspects of biology which I will be focusing on in this report is the ZSL's conservation of the animals, endangered species and how they are breeding threatened species so they can return to the wild. London Zoo also works closely with Whipsnade Wild animal park to try and expand the zoo-based conservation work and international zoo programmes. The programmes department is run my Nick Lindsay who worked as ZSL's senior curator and has extensive knowledge of zoo keeping and captive breeding and reintroduction programmes. ZSL offers expertise in these areas: * The provision of zoo-based technical support to new and developing zoos. * Advice on the development of species conservation programmes including husbandry, breeding and reintroduction. * Zoo consultancy providing advice on the design and development of new zoos or facilities. ...read more.

The threats to wildlife are: * Over harvesting * Air pollution * Habitat destruction * Climate change These factors are destroying animals and their habitats around the globe, which is why ZSL has chosen to focus its conservation work around certain vital areas. I am going to be studying just two of the many areas ZSL focus on providing conservation case studies. The two areas are: * Desert and rangelands * Marine and fresh water Desert and rangelands Case study - Asian elephant conservation in Thailand The desert and rangeland areas of the earth contain unique plant and animal species that have adapted especially to live in their extreme environments. A conservation programme ZSL are running is for the Asian elephants in Thailand. The Asian elephants there are forest elephants and it is thought that fewer than 50,000 are thought to survive in total. Barely 1500 of these elephants survive in the wild, and there are twice that number in captivity. The reason for this decrease in their population is due to infrastructure development, human encroachment and the logging industry. These factors have been minimising the size of the forests, therefore forcing the elephants to live in a much smaller area. Another reason is the conflict between the elephants and human. ...read more.

This is seen as a serious ethical issue to many people, because these fish are being taken out of their natural habitats to be sold as pets and other purposes where they probably will not survive for very long because of the conditions. Humans are held mainly responsible for ruining this habitat; unregulated tourism means that the anchors from boats are damaging coral. Although humans are being blamed here, natural causes can also damage this habitat such as hurricanes; the strong ocean currents can damage the coral and therefore it will die. Why is conservation so important? If we cut down timber without planting new trees or allowing sapling to grow, forests will disappear. It is important to conserve species and habitats for their beauty and out of compassion. The most important reason for conservation though, is that each and every organism on the earth is a single threat of a vital web of life. If any of these threads are broken, it makes this web weaker. Conservation Worldwide People and organisations around the world are trying to conserve species around the globe to prevent total extinction of the ones at threat. Organisations which I found that are trying to make a difference and future developments are: The Royal Society for protection of Birds; WWF; Greenpeace; Friend of Earth International; The Wildlife Trusts; English Nature; ZSL; The World Conservation Union. ...read more.