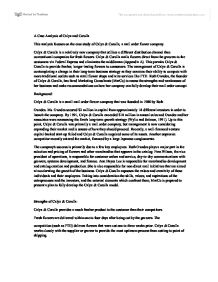 A case study analysis of C&amp;C

A Case Analysis of Calyx and Corolla This analysis focuses on the case study of Calyx & Corolla, a mail order flower company. Calyx & Corolla is a relatively new company that utilizes a different distribution channel than conventional companies for fresh flowers. Calyx & Corolla mails flowers direct from the growers to the customers via Federal Express and eliminates the middleman (Appendix A). This permits Calyx & Corolla to provide fresher, longer-lasting flowers to consumers. The management of Calyx & Corolla is contemplating a change in their long-term business strategy as they examine their ability to compete with more traditional outlets such as retail flower shops and wire services like FTD. Ruth Owades, the founder of Calyx & Corolla, has hired Marketing Consultants (MarCo) to assess the strengths and weaknesses of her business and make recommendations on how her company can fully develop their mail order concept. Background: Calyx & Corolla is a small mail order flower company that was founded in 1988 by Ruth Owades. Ms. Owades secured $2 million in capital from approximately 18 different investors in order to launch the company. By 1991, Calyx & Corolla exceeded $10 million in annual sales and Owades and her associates were reassessing the firm's long-term growth strategy (Wylie and Salmon, 1991). Up to this point, Calyx & Corolla was primarily a mail order company, but management is now considering expanding their market and is unsure of how they should proceed. Recently, a well-financed venture capital-backed start-up failed and Calyx & Corolla acquired some of its assets. Another unproven competitor recently entered the market, financed by a large Japanese conglomerate. The company's success is primarily due to a few key employees. Ruth Owades plays a major part in the selection and pricing of flowers and other merchandise that appears in the catalog. Fran Wilson, the vice president of operations, is responsible for customer orders and service, day-to-day communications with growers, systems development, and finance. ...read more.

977 61 (470) 1,004 General & Administrative 1,459 Net Profit 113 Recommendations Recommended Market Segments The retail flower and plant business was approximately $9 billion in the United States in 1990, and growing at nearly 8% per year (Wylie and Salmon, 1991). In 1991, Calyx & Corolla had less than $20 million in annual sales, so they currently hold a market share of ~0.2%. Given the information provided in the case, we believe Calyx & Corolla has sufficient product offerings 5 and a good distribution system with the FedEx alliance. We believe their future growth is dependent upon their marketing approach. Calyx & Corolla is operating in a niche market (Kotler, 2002) that consists of people who want to buy fresh flowers, have them delivered in the U.S., and are willing to purchase via mail order. We believe their company is built to serve this niche market, and recommend that Calyx & Corolla continue to focus on this niche market. Catalogs Sales in New Media .There are two striking pieces of information that can shape the catalog marketing approach at Calyx & Corolla: 1) 85% of active buyers are women from 30-55 years of age with high disposable income, and 2) using rented lists of names currently costs Calyx & Corolla $4 per customer to create a buyer. We believe Calyx & Corolla should focus its marketing efforts to the people that most often buy its products in an attempt to reduce the cost to acquire a new customer. We recommend that Calyx & Corolla place one or two page advertisements in magazines and other print media where they could reach the women that most often buy there are products, in lieu of sending catalogs to rented lists of names. We recommend they place these ads containing their most popular three-five products in Red Book, Modern Bride, Cosmopolitan, Soap Opera Digest, and other women's magazines. ...read more.