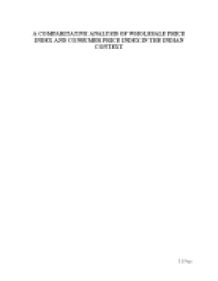 ﻿A COMPARITATIVE ANALYSIS OF WHOLESALE PRICE INDEX AND CONSUMER PRICE INDEX IN THE INDIAN CONTEXT 2011-2012 ________________ Table of Content: Sl no Particulars Page no Chapter I 1.1 Introduction to Indian Economy 2 1.2 introduction to WPI and CPI 4 Chapter II Research Design 1. Title of the project report 9 1. Research Problem 9 1. Scope of the Study 9 1. Research Design 9 1. Objective of Study 9 1. Data collection Methodology 9 1. Limitations of the Study 10 Chapter III Analysis 12 Chapter IV Recommendations and Conclusions 22 1. Bibliography ________________ CHAPTER I INTRODUCTION ________________ India, a country which was world?s largest economy for more than 1500 years (though then it was geographically larger) and then was robbed by foreigners and yet the country with largest number of youths is determined to prove that India was a country of golden birds and it always will be. GROSS DOMESTIC PRODUCT (GDP) Sum of all goods and services produced in a country within a specific period is called GDP of the country. It is indicator of economic soundness of a country and parameter of mapping the living standers of the people, therefore the more is GDP the better is living standard. 2010 2011 Q1 Q2 Q3 Q4 Q1 Q2 Q3 Q4 7.3% 9.4% 9.3% 8.9% 8.3% 7.8% 7.7% 6.9% 6.9% GDP growth rate is the minimum in the previous two years. It is caused by high local borrowing costs and of course due to the euro crisis. In this quarter manufacturing industry?s growth dipped to 2.7 % from 7.2 % in previous quarter, however in order to address inflation, step taken by the reserve bank of India to increase key rates multiple time also hampered our industry badly. With the combined effect of rates hike and the euro crisis, industrial expansion became formidable. 1. $1.632 trillion (nominal: 9th; 2010) 2. $4.057 trillion (PPP: 4th; 2010) ...read more.

Why are other countries following CPI? As stated earlier CPI is followed my most countries around the globe. It is interesting to know that India is one of the few countries which don?t follow the CPI. The Consumer Price Index was initially used by America during the First World War when rapid increases in prices, mainly in shipbuilding centers, made it necessary to develop an index to calculate cost-of-living. Later on it was adopted by the government in its calculations because people's buying habits had changed substantially. During the Second World War when most commodities became scarce and goods had to be rationed, the index weights had to be adjusted temporarily to show these shortages. In 1951, the BLS again made interim adjustments, based on surveys of consumer expenditures in seven cities between 1947 and 1949, to reflect the most important effects of immediate postwar changes in buying patterns. The index was again revised in 1953 and 1964. After that there was no end to CPI?s fame. It gave a better understanding of the standard of living, and was slowly adopted by more nations. The major favouring factors to CPI were: 1. The changing consumption habits of the consumers. 2. The spread of consumerism and the popularization of service industry like restaurants, etc led to a need for a new index. 3. The world war led to a change of responsibility for the female who were until then bound in the house in the western nation. This in turn changed the demand supply scenario. A new class was born. A new index was required to measure their needs. 4. As European countries started adopting it most other nations started adopting it. 5. The CPI was created to offer people, businesses, and government knowledge of the costs of inflation. 6. It covers food, beverages and other things which are not covered under other similar indexes. ...read more.

1. The new series has a better geographical as well as commodity coverage than the earlier series. 1. The weights have been derived from the 61st round of the NSS consumer expenditure survey (2004-05). 1. Data for the urban CPI numbers will be collected from 310 towns (compared to 78 in the current CPI-IW, for all India) whereas for rural CPI numbers, 1,181 villages have been selected broadly on patterns of population distribution. Field officers of the NSSO and officials from the Department of Posts will be the price collection agents for urban and rural centres respectively. The basket of consumer goods in the new CPI has also risen from 25 to 250. 1. Since the two series are not comparable, inflation numbers based on the new CPI will be available only from February 2012. The share of food in the new CPI has seen a small dip in comparison to the CPI-IW while the share of services has risen. The share of housing has also seen a sharp rise. The new CPI will cover the entire population and not a specific group like industrial workers. In addition, the weights in the new CPI are taken from a recent consumer survey. The CSO has indicated that the weights shall be revised with next round of NSSO consumption expenditure survey in 2011-12. ________________ CHAPTER IV RECOMMENDATIONS AND CONCLUSION The economic world today demands for a more dynamic index actions. Inflation today is already touching two digit figures. At this point it is important to know the actual inflation percentage so that corrective actions can be taken on time. The traditional ways of doing things need to be re- looked into and new methods need to be adopted to ensure continuous growth. India is at that threshold where it needs to take such a decision and change its practices. WPI system of indexing is old and outdated. It needs to be upgraded or replaced by better systems. The process will not be a simple one but, one which needs to be taken at the earliest. ...read more.