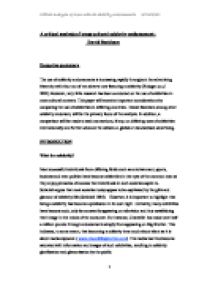 A critical analysis of cross cultural celebrity endorsement: David Beckham Executive summary The use of celebrity endorsements is increasing rapidly throughout the advertising fraternity with four out of ten adverts now featuring a celebrity (Erdogan et al 2001).However, very little research has been conducted on the use of celebrities in cross cultural contexts. This paper will examine important considerations by comparing the use of celebrities in differing countries. David Beckham among other celebrity endorsers, will be the primary focus of the analysis. In addition, a comparison will be made to seek connections, if any, on differing uses of celebrities internationally and further advance the debate on global or standardised advertising. INTRODUCTION What is a celebrity? Most successful individuals from differing fields such as entertainment, sports, business and even politics have become celebrities in the eyes of the common man as they enjoy pinnacles of success that individuals in such societies aspire to. Schickel argues that most societies today appear to be captivated by the glitz and glamour of celebrity life (Schickel 1985). However, it is important to highlight that being a celebrity has become a profession in its own right. Certainly, many celebrities have become such, only by constantly appearing on television and thus establishing their image in the minds of the consumer. For instance, Chantelle has made over half a million pounds through endorsements simply from appearing on Big Brother. This indicates, to some extent, that becoming a celebrity is as much about talent as it is about media exposure ( www.chanell4bigbrother.com). The media has thus become saturated with information and images of such celebrities, resulting in celebrity glorification and glamorisation by the public. This new trend appears to have originated in the U.S.A with the onset of reality shows in the late 90s and spread to the U. K and most of Europe. There is, however, very little empirical evidence to suggest that the rest of the world is following this trend and this may largely be attributed to more conservative and traditional cultures of Asia, Latin America and Africa. ...read more.

Although Beckham has done this through Addidas in China, there are still many failures such as the Iranian debacle. This should be a point of focus for future research. Credibility There is a general consensus that an individual will accept a message if it is given from a source she believes to be well informed , intelligent and capable of transmitting valid massages (Hovland et al 1953:21). The same author identified two dimensions that represent the spokesperson's credibility. These are trustworthiness and integrity. Trustworthiness is considered along with honesty, integrity and believability of the endorser as perceived by the target audience ( Erdogan , Baker and Tagg, 2001). This theory offers a sound rule of thumb in how communication works. At a basic level this can be supported by people's acceptance of news material on television and newspapers as facts because of the perceived integrity of the source. In celebrity endorsements, likewise, credibility is a major issue. The use of celebrities such as Beckham to promote Addidas brands is heavily reliant on his credibility as a successful sportsperson who the audience perceive as knowledgeable and expert at his profession. In a cross cultural context however the issues change. Credibility is still affected by the basic essentials of trust and expertise, however this is not always linked to integrity as suggested and if it is, the measures of integrity are subjective and elusive. One wonders how Calvin brooks a.k.a "SNOOP DOGG" is able to feature in adverts such as DaimlerChrysler and whether such endorsements would work for the Chinese markets or even British markets .After all, this is a self confessed gangster and pimp and who commands a massive following. His rap culture has violent and immoral undertones and yet he is one of the biggest endorsers in America and sells number one records throughout the world. (Hein: 2005) Snoop himself collaborates and notes that in America hip hop culture is a major part of music, sports and business. ...read more.

In this respect it is necessary to first look at the product and relate it to cultural aspirations and then ultimately adjusts the endorser execution or presentation of the product to suit the national or cultural appeals. It would be folly for example, to have endorsement in China based on the Beckham s*x appeal as often seen in the U.K. The importances of cultural considerations have been carefully appraised and should complement the implementation and understanding how advertising works. We can reach the logical conclusion that Chinese audiences are more likely to conform to group norms and more likely to follow pre-dominant trends , unlike their western counterparts . Ultimately, this essay has shown that cross cultural celebrity endorsement is still a relatively new area of research. In addition, there is inconsistency in how celebrities are used at an international level. It is also unlikely that international celebrity endorsements can succeed without relative adaptation of both the product, the message and the endorser to suit prevailing cultural considerations in the host country. The degree and extent of adaptation will differ depending on the psychic distance between the endorse and the target audience. Limitations Given the mentioned importance of cross cultural similarities and differences, findings of this study do not provide answers regarding how often celebrities are used in the two differing cultures. Neither is it clarified as to how far celebrity endorsers can be extended in different countries. Such answers can be derived from a more substantial content analysis rather than a qualitative report. There is also a need to research the extent of public glamorisation between cultures, and how personal characteristics may influence this. Although this paper attempted to demonstrate the differing endorsements strategies between countries, it fails to provide enough examples largely due to its qualitative nature. Advertising practitioners need to know more than just when to use a celebrity endorser. They should also be clear on how to use endorsers. It may be necessary to examine how this can be done indifferent countries. ...read more.