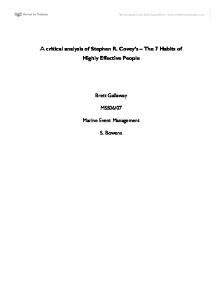 A critical analysis of Stephen R. Covey's - The 7 Habits of Highly Effective People Brett Gallaway MSS06/07 Marine Event Management S. Bowens Introduction This paper aims to give an overview of Coveys 7 Habits of highly Effective People followed by a critical analysis of his work. A brief history of Dr Covey will be given along with an introduction to is book. The 7 Habits themselves will then be given, along with critical considerations of each. The paper will then finish with a summary and conclusion. Dr Stephen R. Covey Covey, born in Utah in 1932, is a hugely influential management guru whose book 'The 7 Habits of Highly Effective People' has become, for many people, a blueprint for personal development. Other books he has written include First Things First, Principle-Centered Leadership and The Seven Habits of Highly Effective Families, with his latest book being entitled The 8th Habit. As well as being a father of 9, Covey also runs a consultancy based in Utah and travels from city to city presenting seminars to businesses, non-profit organizations, government departments, and educational institutions. Included his prestigious list of clients are Proctor and Gamble, Blue Cross & Blue Shield, Federal Express, and Shell Oil (Franklin/Covey, 2007). Covey's book promotes his idea of principle-centered learning by the use of his '7 Habits' concept. He advocates the belief that "the actions of empowered people will energize and change the whole system in which these people live and the society in general" (Covey, Stephen R. ...read more.

Unfortunately though, it is a fact of life that individuals can sometimes be unsure of which path they wish to take, and adherence to one strict path could result in a stagnation of the individual. Covey makes an assumption that we are all living to the same means, and that we all have the stability of a constant sphere of activity around us. Again, unfortunately, the turbulence of some people's lives would make adherence to both habit 2 and 3 prohibitive or extremely difficult at best. But as stated, it's Coveys challenge to the potential follower and possibly the first steps towards stability. Habit 3 - Put First Things First: Covey calls this the habit of personal management; he suggests the need to organize and execute priorities in line with habit 2. Coveys distinguish between 'urgent' and 'important' problems in habit 3, saying that important problems should take precedence over urgent ones. A sound concept put forward by Covey although somewhat simplistic. He fails to acknowledge that lower ranking individuals (in business) and those who fall within McGregor theory X type employment, simply do not have the scope for choice within the remit of their jobs. Despite this minor fault however, putting first things first quite simply is a realistic and achievable aim. Habit 4 - Think Win/Win: "Success follows a cooperative approach more naturally than the confrontation of win or loose", (Covey, Stephen R. ...read more.

for impact. Arguably, rather like Habit 4, sharpening the saw has the power to become the basis for a stand alone personal effectiveness theory. Within Habit 7 we see some of the ideas and concepts that most people would agree, could be the basis for a well rounded and healthy lifestyle. Conclusion Through the course of doing my research for this assignment I have found, in Covey, a management theorist, whom I feel, has created a system which for the most part is practical and achievable. He gives a practical and thought provoking set of reasons to actually test for oneself. The book itself states the cause in a rational manner, and should be seen as "a sincere and thoughtful effort to help people towards spiritual growth" (Parsons, J & Fenwick, T. 1996). Despite some minor misgivings, Covey has created something which can, in my belief, be a blueprint for personal development. Like any blueprint or as Covey would put it "prescription", the potential follower must understand, that to be able to follow Coveys Habits without deviation, would be an extremely difficult task. For the most part however Coveys 7, almost 'common sense' habits, if used in a more flexible manner can become an effective and extremely powerful tool of self realisation. Parsons & Fenwick summarise Coveys work perfectly: "His book not only validates many of our own anxieties as post-modern humans, but outlines our salvation by providing practical steps for action that are manageable and that feel right -- at least they don't feel blatantly weird. ...read more.