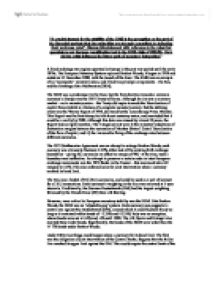 &quot;A crucial element for the stability of the EMS is the perception on the part of the financial markets that the authorities are strongly committed to defending their exchange rates&quot; Discuss.

"A crucial element for the stability of the EMS is the perception on the part of the financial markets that the authorities are strongly committed to defending their exchange rates". Discuss this statement with reference to the roles that speculators and German reunification had in the EMS crisis of 1992/93. How did the crisis influence the future path of monetary integration? A fixed exchange rate regime operated in Europe in the post war period until the early 1970s. The European Monetary System replaced Bretton Woods; it begun in 1979 and ended on 31 December 1998, with the launch of the Euro. The EMS was an example of an 'incomplete' monetary union, and it had two principal components - the Ecu, and the Exchange Rate Mechanism (ERM). The ERM was a predecessor to the Euro, but the first direction towards a common currency in Europe was the 1957 Treaty of Rome. Although its aim was a common market - not a monetary union - the Treaty did aspire towards the liberalisation of capital flows (which is a feature of a complete monetary union). But the defining event was the Werner Report of 1970, delivered by the Luxembourg Prime Minister. ...read more.

AT this date the Lira is devalued against the DM by 10% reflecting Italy's inflation being higher than Germany's. The next day, the previous market rate will fall between the new limits. The change occurring at t1 will be minimal; the market exchange rate will fall the day after realignment, as speculators take their profits. However, a period of relative stability existed from 1987 to 1990, between which no country sought realignment. (INSERT DIAGRAM 5.9 FROM De Grauwe) Since the whole aim of the EMS was to create 'a zone of monetary stability' within Europe, the ERM needed credibility. The private sector could often ask; would the fixed exchange rates be maintained? Thus, the central bank of each participating nation was charged with maintaining the exchange rates. In other words, when a currency reached its margins, marginal intervention was required. This would be in the form of buying (or selling) the domestic currency, so as to push the currency back within its margins, or by altering interest rates. But this commitment wasn't absolute - a country could, as an alternative, request for and seek a parity re-alignment. In 1990, the EMS evolved into a truly fixed exchange rate system with (almost) ...read more.

For instance, the bands were too narrow, allowing for speculators to have the influence they did. Additionally, the elimination of the control of capital - in order to move toward a fully integrated internal market - at the end of the 1980s gave the speculators further power. Finally, and crucially, if the authorities possessed any credibility, the speculators would have had little reason to bet so much against the currency movements that happened. The 1992/93 crises have indeed influenced the path of integration. The authorities in 1992/93 lost all credibility - since then, all further monetary integration has had credibility as a major issue. In August 1993, the EMS changed into a quasi-floating exchange rate regime, with bands at +/- 15%. This was to reduce the magnitude of influence that speculators could have. As the EU approached the launch of the Euro, one of the five convergence criteria necessary to gain entry was that a currency should not have been devalued in the previous two years. Therefore, between 1997 and 1999, credibility became a major policy objective. Authorities were more committed to maintaining their exchange rates. The instability caused in 1992/93 was undesirable. Under EMU now, the stability & growth pact aims to stabilise the union by restricting government deficits to 3% of GDP, and the new European Central Bank has a strict mandate for stabilising inflation across the region. ...read more.