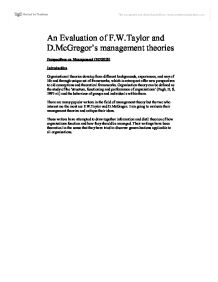 An Evaluation of F.W.Taylor and D.McGregor's management theories Perspectives on Management (MN2018) Introduction Organisational theories develop from different backgrounds, experiences, and way of life and through unique set of frameworks, which in retrospect offer new perspectives to old conceptions and theoretical frameworks. Organisation theory can be defined as the study of the 'structure, functioning and performance of organisations' (Pugh, D, S, 1997:xii) and the behaviour of groups and individuals within them. There are many popular writers in the field of management theory but the two who interest me the most are F.W.Taylor and D.McGregor. I am going to evaluate their management theories and critique their ideas. These writers have attempted to draw together information and distil theories of how organisations function and how they should be managed. Their writings have been theoretical in the sense that they have tried to discover generalisations applicable to all organisations. Frederick Winslow Taylor (1856-1915) was an American Industrial Engineer born in Germantown, Pennsylvania. His early observations as an foreman at the Midvale Steel Company (1878) inspired him to develop new management principles and a whole new perspective to practical management problems by applying scientific management to the workplace. Scientific management involved a new system of working 'time and motion studies' (Kouvuri, D, 24/10/02). His innovations in time and motion studies, paid off in 'dramatic improvements' (Kouvuri, D, 17/10/02) in productivity, as they helped determine the best methods for performing a task in the least amount of time. At the same time, he was destroying the soul of work, dehumanising factories, and making them into 'automatons' (Needham, D & Dransfield, R, 1998: 156). His principles known as 'Taylorism' (Dean, C, C, 1997) concentrated on gaining maximum efficiency from both the workers and the machines in the factory, which replaced the 'old thumb of rule method' (Cossette, P, 2002). He developed his principles in accordance to self-beliefs of maximum efficiency regardless of people feeling 'alienated' (Hannagan, T, 1998: 143). ...read more.

Interest in Taylor was widespread among the managers (in his time and after his death) not only in the U.S but also in France, Italy, Germany, Russia and Japan, which shows the effectiveness of his theory. Approaching the end of the 'industrial revolution' (Kouvuri, D, 28/10/02), Taylor's ideas provided a catalyst for increasing the output of American factories beyond the promise of technological advances alone. After Taylor's death in 1914, scientific management spread throughout the world, and it has influenced everything from advice to housewives on how to do chores, to how Japanese (and later America) cars have been made. Taylorism has also shaped the structure of 'American education' (Cossette, P, 2002). In 1962 the historian 'Raymond Callahan' (Huczynski, A & Buchanan, D, 2001: 364) wrote the best known account oh how scientific management has affected American studies. Much of the book recants the influence of Taylor 's ideas on educational administration, everything from how to make better use of buildings and classroom space to how to standardise the work of janitors. During Taylor's time American society was going through a period of 'stress and reassertion of puritan values' (Dean, C, C, 1997) His theory was developed at the right time and right people as he was writing at a time when factories were creating big problems for management who needed new methods for dealing with the management challenges. Taylor's theory is referred to as scientific management as he attempted to make a 'science for each element of work' (Hannagan, T, 1998:45) and restrict alternatives to remove human variability on errors. His focus was on efficiency. The problems with Taylor's approach of scientific methods lead to lay-offs, due to available work being completed sooner. In '1912' (Pugh, Hickson & Hinings, 1971: 76) opposition to 'Taylorism' lead to strikes and to hostile members of congress asking for explanations of his ideas and methods. The Scientific approach did not take into account the actual needs of people at work. ...read more.

People today feel they have the right to stand up for themselves and for their opinions to be heard whereas people in the early 19th century had different thinking due to no legislations being present for employees needs and wants. Metaphors of machines are now very limited due to the 'complexity of markets and products, technology and training' (Kouvuri, D, 31/10/02). People today have high expectations of work due to the increase levels of participation in education. People are able to think things through and work in an environment, which is best, suited for them. Mechanistic organisations existed in Taylor and McGregor's time as opposed to organic organisations today. Mechanistically structured organisations have difficulties to 'changing circumstances' (Morgan, G, 1996: 28) as they are designed to achieve predetermined goals and are not designed for innovation. However mechanistic approaches have proved to be popular because of the efficiency in the performance of tasks that can be routine by managers having control over their employees. Organisations as 'organisms' (Kouvuri, D, 14/11/02) are metaphorically characterised by Morgan (1996). The workplace needs a combination of machine and organism to make it viable and efficient, which Taylor didn't understand. Conclusion The nature of the work performed will inevitably influence employee's perceptions of the pleasure involved. At one end of the spectrum (Taylorism) will be the job that involves endless repetition of a simple and tedious operation, where they're only a few seconds in which to perform the task before it has to be repeated. Employees will acquire little sense of achievement from producing a very small part of an end product, which they may never see. There maybe very little time for conversation with workmates because of the urgency to perform the next operation. At the other extreme (McGregor's theories), there will be jobs involving personal involvement and industrial contributions to produce methods. These jobs may require high levels of training and expertise and will give the employee prestige as well as meaning to his or her life. ...read more.