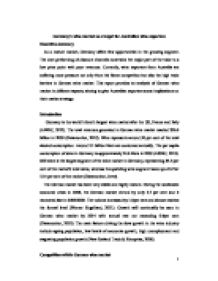 Germany's wine market as a target for Australian wine exporters Executive summary As a mature market, Germany offers few opportunities in the growing segment. The over-performing of discount channels constrains the major part of the trade to a low price point with poor revenues. Currently, wine exporters from Australia are suffering more pressure not only from the fierce competition but also the high trade barriers in German wine market. This report provides an analysis of German wine market in different aspects, aiming to give Australian exporters some implications on their market strategy. Introduction Germany is the world's fourth largest wine market after the US, France and Italy (AWBC, 2012). The total revenues generated in German wine market reached $26.6 billion in 2009 (Datamonitor, 2010). Wine represents around 30 per cent of the total alcohol consumption. Around 2.1 billion liters are consumed annually. The per capita consumption of wine in Germany is approximately 24.6 liters in 2009 (AWBC, 2012). Still wine is the largest segment of the wine market in Germany, representing 84.4 per cent of the market's total value, whereas the sparkling wine segment takes up a further 12.4 per cent of the market (Datamonitor, 2010). The German market has been very stable and highly mature. During the worldwide economic crisis in 2008, the German market shrunk by only 2.7 per cent and it recovered fast in 2008/2009. The volume increased by 1.8per cent and almost reaches the formal level (Werner Engelhard, 2011). Growth will continually be seen in German wine market by 2014 with annual rate not exceeding 0.4per cent (Datamonitor, 2010). The main factors driving the slow growth in the wine industry include ageing population, low levels of economic growth, high unemployment and stagnating population growth (New Zealand Trade & Enterprise, 2006). ...read more.

In contrast, Australia are under-performing in the Supermarket, Convenience and Independent channels which yield slightly higher prices. Consumer behavior in German wine market Preference change in products and taste has been seen among German wine consumers. German households tend to favor red wines over white wine even though Germany is well known for its white wine production. Red wine German households purchased in retailers in 2009 accounted for 63 per cent, which is much higher than that of white wine and ros�, 29 per cent and 8 per cent respectively (Datamonitor, 2011). Furthermore, the lighter and low-alcohol wine are becoming more popular (Euromonitor, 2011). This might supply more market opportunities to the New World wine. The change of demography of German wine consumers, from traditionally middle-aged male consumers to young, particularly female consumers, might partly contribute to such situation. German wine consumers are well known for their price sensitiveness. This gives an explanation why the discounter channels accounts for the majority sales of wine in German Market. In contract, brand loyalty is not particular among German wine consumers although their purchase is more quality-oriented. German wine consumers generally prefer wine that produced domestically or that imported from other EU countries as they are perceived to be of high quality (Euromonitor, 2009). Nevertheless, ten biggest brands in Germany represent just 3.5 per cent of the market (Wine Australia, 2012). Marketing opportunities for Australian wine in Germany's market Current market suggests there are limited opportunities for Australian wine to enter the market or expand their market share due to price awareness and the mature nature in German wine market. Local production dominates the lower price points whereas Italy and France dominates the higher price points, at the same time they are strongly represented in the lower price points (AWBC, 2007). ...read more.