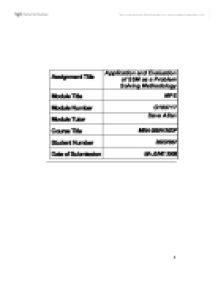 Application and Evaluation of SSM as a Problem Solving Methodology

Assignment Title Application and Evaluation of SSM as a Problem Solving Methodology Module Title MPS Module Number G105717 Module Tutor Dave Allan Course Title MBA 006N120DF Student Number 20237057 Date of Submission 5th JUNE 2008 Abstract: This report is amid at the explanation of the theoretical application of the soft system methodology, this is done in the first half of the report. The latter section focuses on the implication of SSM on Newport Business School. The analysis of NBS is carried out as my reflective experience under the Soft System Methodology. Table of content Introduction 3 Soft System Methodology 4 Application of SSM on NBS 6 Conclusion 9 Figures 10 Bibliography 17 1) Introduction: Soft system thinking is a form of systematic thinking that understands realities as the creative construction of the human beings (Jackson, 1999). It generates and works with an evolving appreciation of the people's point of view and intentions. Hence, the soft system thinking is concerned with a situation as they are defined through "action concept" (Checkland, 1981) which insist that the realities and the authentic action cannot be solely represented through the scientific system models as in other form of systematic thinking, like Hard System Thinking. The models can be implied as "a pair spectacles" through which one can "look and interpret reality" (Reason, 2001). Hence, problem solving techniques under the soft system thinking adhere to a qualitative approach as based upon Soft System Methodology (SSM). SSM rests on the assumption that the resolution of complex problem relies on the innate subjective views of the participants in the situation. ...read more.

First, the desirability of the human activity system captured in the system model is raised and discussed. Secondly, the issue of the feasibility is explored in the context of the problem situation, attitude and political interactions that dominate (Reason 2001). The change follows three norms: procedural changes (how activities are done within the structure), structural changes (organisational groupings, responsibility); or attitudes (changes of influence, learning, values and norms) (Beckford, 1998). In stage 7, action is taken - implementing in real-world situation the changes that have been purposed (Beckford, 1998). It is important to appreciate that once these changes have been implemented, the problem situation will be modified. In other words, the whole process follows cyclical pattern (Platt, 1995) 3) Application of SSM in Newport Business School: University of Wales, Newport is comprised of two campuses i.e. Newport Business School and Caerleon Campus. The business school has its campus situated in Allt-yr-yn where the graduate and post graduate education is delivered in business and administration, computing and engineering. Every year students from all over the world are enrolled in the university. The problem situation is unstructured from the student prospective; the prevalent problems are in the organistion structure of the UWN (Figure 5), where NBS makes a separate entity within the University of Wales. It coordinates with the Caerleon Campus for the general administration of the activities and use of the faculties and facilities such as sport and accommodation. The entire administered departments such as management, human resource and recruitment, sport and recreation, finance and international and admission office are inaugurated and under the control of Caerleon Campus. ...read more.

However the methodology lacks agreement on various occasions. It provides a rational thinking, this thinking displays the perspective of the team which conducts the SSM, and however, this can result in bias decision making and problem solving. The lack of holistic approach put a limit in the latter phase of the analysis. The stress in the SSM is on the relations and linkage as the system operated in the open system. This perspective denies the close system approach and also makes the system hard to manage. Further, SSM doesn't imply appropriate methods to build a system, that there is no real/scientific mean to put an end to the problem. This leaves ambiguities and the simplicity of the SSM results in complications. It is more likely to say that the use of SSM is workable in the condition where the basic understanding of the situation is required. It provides information and hence this information can be utilized and incorporated with the other mythologies to make the system work in an esteemed faction. Figures Figure 1: The main steps of Soft System Methodology (Checkland, 1981) Source: Johnson, A. (1999), Using Soft Systems Methodology in the Analysis of Public Involvement in EIA, [WWW] http://ciart.otago.ac.nz/annaiaia99.html (accessed on 31st of May, 2008) Figure 2: Rich picture prepared by stakeholders involved in sustainable use of ground water in Noord Brabant, the Netherlands Source: Ramirez, R. (2002), A conceptual map of land conflict management: Organizing the parts of two puzzles, [WWW] http://www.fao.org/sd/2002/IN0301a_en.htm (accessed on 31st of May, 2008) Figure 3: CATWOE analysis for the root definition Source: Khosrow, M. (2000) Management in 21st Century, London: Ideal Group Incorporation Figure 4: Conceptual Model Figure: 5 Organistion structure of UWN Figure 6: Rich Picture NBS Alan, D. ...read more.