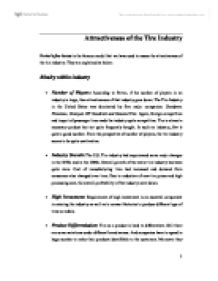 Attractiveness of the Tire Industry.

Attractiveness of the Tire Industry Porter's five forces is the famous model that we have used to assess the attractiveness of the tire industry. They are explained as below: Rivalry within industry * Number of Players: According to Porter, if the number of players in an industry is large, then attractiveness of that industry goes down. The Tire Industry in the United States was dominated by five major companies: Goodyear, Firestone, Uniroyal, BF Goodrich and General Tire. Again, foreign competition and import of passenger tires made the industry quite competitive. Tire is almost a necessary product but not quite frequently bought. In such an industry, five is quite a good number. From the perspective of number of players, the tire industry seems to be quite unattractive. * Industry Growth: The U.S. Tire industry had experienced some major changes in the 1970s and in the 1980s. Overall growth of the entire tire industry has been quite slow. Cost of manufacturing tires had increased and demand from consumers also changed over time. Due to reduction of new tire prices and high processing cost, the overall profitability of the industry went down. * High Investment: Requirement of high investment is an essential component in entering the industry as well as to convert factories to produce different type of tires as radials. * Product Differentiation: Tire as a product is hard to differentiate. Still there are some variations under different brand names. And companies have to spend in huge number to make their products identifiable to the customers. Moreover they not only want to keep their existing customers but also want to acquire their competitors' customers. * Exit Barriers: As huge amount of investment is required to set up a manufacturing plant and to shift to new business, it is extremely difficult to exit from the tire industry. Companies like Uniroyal, Goodrich had to merge due to high exit barriers. ...read more.

* Price: Goodyear positioned the Aquatred at the top of the broad-line segment. So, the price of tire was higher than earlier tires. But, the survey in 1991 (Exhibit 7) showed that 16% of the price constrained buyers and 10% of the commodity buyers were loyal to Goodyear. That means they had a more favorable image in these two segments, which is more receptive to lower price. So a higher price would not help their image at all. On the other hand the survey in the test-market shows that consumers are treating both the Aquatred and the Invicta GS in almost same manner. So, whether the customers would be willing to pay this high price is a big question. * Distribution: Selection of the distribution channel was another major issue. Goodyear could expand their channel or continue their existing strategy. If they expand their channel then it would increase their sales but, on the other hand it would also erode the value of Goodyear brand, cannibalize sales of existing outlets and might cause dealers to take on additional lines of tires. * Tire life: Goodyear was planning to give 60,000 miles warranty on the Aquatred. But, the most important attribute of a tire according to the customers was tread life and Michelin and Bridgestone both planned to launch new tires with 80,000 miles warranties backed by heavy advertising. So, convincing the dealers and customers would be a big challenge. * Misrepresentation: A male mystery shopper visited nine independent Goodyear outlets during October 1991 and found out that there was variation in the presentation and pricing of the Aquatred. This could hamper the launching of Aquatred as most of the dealers did not present the qualities of Aquatred explicitly. On an average, in 5 out off 6 outlets the price of Aquatred with Black Sidewall was lower by $7.57 per tire and the price of Aquatred with White Sidewall was lower by $10.17 per tire (Exhibit 10 & Appendix A.1). ...read more.

The distribution structure in the tire industry has changed over the years and independent dealers are the most powerful. As a result the manufacturers have less control over the dealers. So, Goodyear must make sure that the dealers are actually providing fast customer service. Other Strategies We have formulated some strategies to tackle the problems in other areas. These are - * Private Label Tire: Goodyear replaced their private label tires in 1991 because of the cannibalization. But, we have calculated in Appendix A.2 that this is a big segment. We can also see from Appendix A.3 that the average percentage of switching to private label tires from a major brand (Bridgestone, Firestone, Goodyear, and Michelin) is 40.5%, which is pretty high. So, the private label tire of Goodyear would take some of the Goodyear's share but it would also take the share of other brands and the total share would actually be greater than Goodyear's initial market share. * Services to the dealers: The services required by the dealers are not the same for everyone. So Goodyear should provide the services only to those who wanted it. For example - Goodyear should provide the advertising accruals only to the small dealers and to some large dealers who wanted it. This would help the large manufacturers to procure tires at the lowest possible price. They should also include the auto services in their advertisements. As the independent dealers derived 48% of their revenues from auto services this would make them very satisfied. * Managing the independent dealers: Goodyear should increase the number of area sales manager in such a way that the dealers can get in touch with the area sales manager whenever they wanted to. They should make sure that the dealers are entertained whenever they faced a problem. * Positioning of the manufacturer owned outlet: Goodyear must make sure that the company owned outlets do not directly compete with the independent dealers. This would discourage the independent dealers from carrying Goodyear tires in their outlets. They must not see Goodyear as their competitors. 1 ...read more.