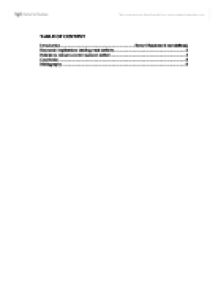 TABLE OF CONTENT Introduction 2 Economic implications dealing trade deficits 2 Policies to reduce a current account deficit 5 Conclusion 8 Bibliography 9 Balance of Payments The international trade in goods and services between countries has increased significantly over the past fifty years. Specialization by each nation has made every country to engage in international trade and hence to maintain balance of payments. The balance of payments is a comprehensive systematic record of a country's financial dealings with the rest of the world over a period of one year. This evaluates all payments among a country and its trading associates. The balance of payment account is divided into two sections, namely current and capital account. Thus the current account consisting the exports and imports of goods and services, net income flow, as well as transfer payments such as foreign aid grants. The current account balance is the accumulation of the balance of trade plus the interest, dividends, profits and transfers. On the other hand, capital account includes all the capital flows such as direct investment, financial investment, currency trading. At the end of the period the current account of the balance of payment can either have a trade deficit or a trade surplus in its accounts. A trade deficit would suggest that the exports are less than imports and a surplus would indicate that the country is exporting more than it imports. ...read more.

The United States have posted a trade deficit since 1970's and a continuous deficit since 1976 till now. (http://en.wikipedia.org/wiki/Balance_of_trade) The US economy has grown over the past 25 years while the current account deficit expanded compared with the years that it shrank. At times of rising deficits the US economy experienced positive effects on employment rate and manufacturing output but not when the deficit was contracting. Critics of trade liberalization often point to the trade deficit as proof that trade destroys job where exports create jobs and imports mean less domestic production and fewer jobs. Another problem with the trade deficit is that unsustainable foreign debts would saddle future generations and as a result it will spook the foreign investors and weaken US dollar. On the other hand, it ignores the fact that trade deficits are linked to a strong, not a weak, dollar. The trade deficit will increase the acceptance of the dollar in the world economy as many foreigners accept dollar in return for their import payments. The best thing for the US economy would be to ignore the trade deficit and concentrate on having a strong economy to attract foreign investment. As long as investors around the world will see the United States as a safe and profitable haven for their savings, the trade deficit will persist, and Americans will be better off because of it. ...read more.

Contractionary monetary and fiscal policy would be used to reduce the level of consumer spending on imports. By using contractionary monetary policy the government will be able to reduce the level of money supply in the economy hence reducing the level of imports and increasing the level of exports. But this would increase interest rate and reduce the level of local competitiveness. The contarctionary fiscal policy could be used to increase taxes and to reduce government expenditure. As income would reduce the level of imports would fall and reduce CAD. Control of exchange rate systems by the government would also help to reduce deficit as locals will be unwillingly to buy foreign goods if it's expensive. Supply side policies such as education training reducing unemployment benefit will increase the productivity of an economy and make its products more competitive in the foreign market. This will help to reduce the current account deficit in the long run. Conclusion Milton Friedman, the Nobel prize winning economist and father of Monetarism, believed that deficits would be corrected by the free markets as floating currency rates rise or fall with time to encourage or discourage imports in favor of the exports, reversing again in favor of imports as the currency gains strength. (http://en.wikipedia.org/wiki/Balance_of_trade) However, a prolonged current account deficit could be damaging to the economy and may lead to some serious economic implications. The government policies could be brought in to mitigate a current account deficit, but still there will be problems in overcoming the current account deficit. ...read more.