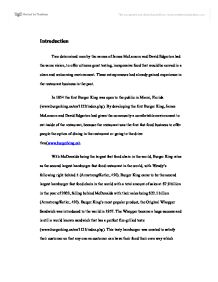 Introduction Two determined men by the names of James McLamore and David Edgerton had the same vision, to offer citizens great tasting, inexpensive food that would be served in a clean and welcoming environment. These entrepreneurs had already gained experience in the restaurant business in the past. In 1954 the first Burger King was open to the public in Miami, Florida (www.burgerking.ca/en/1122/index.php). By developing the first Burger King, James McLamore and David Edgerton had given the community a comfortable environment to eat inside of the restaurant, because the restaurant was the first fast food business to offer people the option of dining in the restaurant or going to the drive thru(www.burgerking.ca). With McDonalds being the largest fast food chain in the world, Burger King rates as the second largest hamburger fast food restaurant in the world, with Wendy's following right behind it (Armstrong/Kotler, 450). Burger King came to be the second largest hamburger fast food chain in the world with a total amount of sales at $7.9 billion in the year of 2003, falling behind McDonalds with their sales being $22.1 billion (Armstrong/Kotler, 450). Burger King's most popular product, the Original Whopper Sandwich was introduced to the world in 1957. The Whopper became a huge success and is still a world known sandwich that has a perfect fire-grilled taste (www.burgerking.ca/en/1121/index.php). This tasty hamburger was created to satisfy their customer so that any one as customer can have their food their own way which relates to their slogan "Have it your way", created in 1974. ...read more.

CB+P is currently using the buzz marketing affect to grab the attention of their customers. One example of the ways that CB+P is using the buzz affect is the way their promoted Burger King's TenderCrispChicken. CP+B made a website www.subservientchicken.com. When customers open the web page, there is a man dressed in a chicken suit and underneath the video. There is an input box where you type what you want the man dressed as a chicken to do. Underneath the input box there are icons they can push; but do not have anything directly with Burger King because CP+B thought that they did not want to give the commercial an "un-cool" effect (Armstrong/Kotler, 451). They are trying to hit everyone with a bang to get them to talk about their advertising which leads to more customers. Burger King's theme promotes making the whole family happy. Their website is very animated, and seems to be directed towards families. They seem to want to be able to make it a family orientated place. Everyone and the family is going to leave happy because they are going to have it their way, no matter how unusual that may be (Armstrong/Kotler, 450). Analysis and Recommendations Burger King seems to be doing a lot of things right. Their slogan is very well known, "Have it Your Way." Although they are doing all of these things correctly they are not the market leader in the fast food industry, that title belongs to McDonalds. ...read more.

This is funny because on the website they have a chicken in a garter. Then there is also a space where you can type in "Get your chicken the way you like it, submit here". 3. Do the TV and viral elements of the Burger King Campaign work well together? What additional elements and media might CPB add to the integrated marketing communications campaign? We think that the virtual (internet) and the commercials go very well together. Both the commercials and the virtual are suggesting that you can get your chicken any way you like it therefore they coincide with each other. The only problem is on the website it does not mention "the king" at all. Maybe they could have flashes between "the king" and the chicken that was in its garter. 4. What other recommendations would you make to Burger King and CPB to help them improve the integration of BK's promotion mix? Burger King could give out more coupons open to the public. Possibly, give a better variety of commercials when they are promoting. Whenever doing the commercials, zero in on the product more so than the comedy aspect of the company. Whenever you look at McDonald's commercials you will notice they focus on the food not to so much the characters that represent the company. More ideas could be, build boards on the side of highways and/or insert ads into magazines. Overall we believe that the CPB are leading Burger King in the right direction. We all agree that their profits should increase. ...read more.