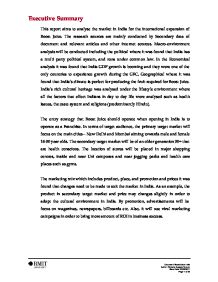 Boost Blobal marketing assignment. This report aims to analyse the market in India for the international expansion of Boost Juice. The research sources are mainly conducted by Secondary data of document and relevant articles and other internet sources.

Executive Summary This report aims to analyse the market in India for the international expansion of Boost Juice. The research sources are mainly conducted by Secondary data of document and relevant articles and other internet sources. Macro-environment analysis will be conducted including the political where it was found that India has a multi party political system, and runs under common law. In the Economical analysis it was found that India GDP growth is booming and they were one of the only countries to experience growth during the GFC, Geographical where it was found that India's climate is perfect for producing the fruit required for Boost Juice. India's rich cultural heritage was analysed under the lifestyle environment where all the factors that effect Indians in day to day life were analysed such as health issues, the caste system and religions (predominantly Hindu). The entry strategy that Boost Juice should operate when opening in India is to operate as a Franchise. In terms of target audience, the primary target market will focus on the main cities-- New Delhi and Mumbai aiming towards male and female 18-30 year olds. The secondary target market will be of an older generation 30+ that are health conscious. The location of stores will be placed in major shopping centres, inside and near Uni campuses and near jogging parks and health care places such as gyms. The marketing mix which includes product, place, and promotion and prices it was found that changes need to be made to suit the market in India. As an example, the product in secondary target market and price may changes slightly in order to adopt the cultural environment in India. By promotion, advertisements will be focus on magazines, newspapers, billboards etc. Also, it will use viral marketing campaigns in order to bring more amount of ROI in business success. Company Overview Boost Juice offers a healthy alternative to fast food, that offers a variety of delicious juices, smoothies and crushes which were all developed with the assistance of a nutritionist, and are all at least 98% fat free and free from artificial flavouring or colouring. ...read more.

Having a look on the opposite side of the graph with WIN Agro Foods and local street vendors are lower in the graph because they haven't established themselves as good as the closer ranged competitors. Boost Juice wants to keep the gap between their competitors and have the upper hand with promotional activities consolidating into a strong foundation to stay long term and dominate the market. The illustration on figure 3.2 (Above) demonstrates the ideal spot for Boost Juice away from their competitors polishing the perfect hygiene and consolidating the brand awareness across India. This graph we see FIL industries creeping up without doing any promotional activities because they have the service of helping the farmers with their pesticide problem. Market Entry Strategy Franchise Boost is a successful franchise in Australia and is continually booming its franchise network worldwide. Therefore it is suggested that Boost Juice entry strategy into India's market is to operate as a franchise. To keep in align with Boost Juice mission statement; "To become the worlds famous and loved brands," India is a market for their future growth potential. When setting up business in India, Boost Juice need to taken in account of the geographical dispersion of India, it is recommended that Australian firms like Boost Juice consider a regional plan, that focuses on multiple locations and markets within India and finding the appropriate partners and agents within each region. Austrade offices in New Delhi, Mumbai, Chennai, Bangalore, Hyderabad and Kolkata provide indispensable local information and advice and are in tune with local businesses. (Austrade) "Doing Business" is a website which aims to help businesses measure regulations and enforcements in different economies and selected cities around the world. In terms of Boost, establishing their business in India, the website gives an in depth step by step process to follow when it comes to starting a business in India. The website identifies the bureaucratic and legal hurdles Boost Juice must overcome to incorporate and register a new firm in India. ...read more.