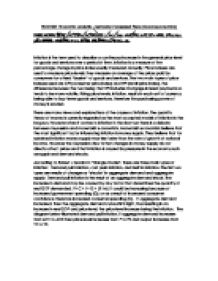 Both supply and demand shocks can cause inflation, but, without money growth the inflation would be short lived. Discuss.

ECO1001 Economic Analysis - Semester 2 Assessed Essay (Macroeconomics) Title: Both supply and demand shocks can cause inflation, but, without money growth the inflation would be short lived. Discuss. Inflation is the term used to describe a continuous increase in the general price level for goods and services over a period of time. Inflation is a measure of the percentage change in price index usually measured annually. Price indexes are used to measure price levels; they measure an average of the prices paid by consumers for a fixed "basket" of goods and services. The two main types of price indexes used are CPI (consumer price index) and RPI (retail price index), the difference between the two being that RPI includes mortgage interest payments so tends to be more volatile. Rising price levels, inflation, results in each unit of currency being able to buy fewer goods and services, therefore the purchasing power of money is eroded. There are many views and explanations of the causes of inflation. The quantity theory of money is currently regarded as the most accepted model of inflation in the long run. However when it comes to inflation in the short run there is a debate between Keynesian and monetarist economists. ...read more.

Another type of inflation is cost push inflation. Cost push inflation is the result of a sudden increase in costs. The main sources of cost increases are: increase in money wage rate and increase in money prices of raw materials (such as crude oil). An increase in costs affects the aggregate supply curve. The higher the cost of production, the smaller quantity firms are willing to produce, therefore aggregate supply decreases and the short run aggregate supply curve shifts to the left. This is illustrated in the graph below. A recessionary gap occurs; this is the opposite of an inflationary gap. It means that real GDP is below potential GDP and the economy is below its full employment equilibrium (unemployment above natural rate). This supply shock on its own does not cause inflation. For inflation to occur aggregate demand must now respond. If aggregate demand does not change then the recessionary gap will eventually forces the money wage rate and prices down, shifting the aggregate supply curve rightward restoring the full employment equilibrium. However if like in demand pull inflation, there is a persistent increase in the quantity of money, cost push process is converted into ongoing inflation. Aggregate demand increases when the quantity of money is increased by the Bank of England. ...read more.

This is a good question because if the is a small percentage change in M and P and a significant change in V then the theory does not work. They believe the assumptions made make the equation flawed. However there is evidence when comparing inflation and money growth rate over time that there is a clear pattern, fluctuations in both rates are in line with each other, this suggests that they are definitely linked however maybe not as simply as the quantity theory of money. Hyperinflation is an obvious example of how money growth can cause inflation however. Hyperinflation is generally considered to be when inflation is greater than 1000%. Hyperinflation is a result of a massive increase in the supply of money, not supported by corresponding growth in output. The increase in quantity of money causes a very big increase in price levels - high inflation, and also results in a loss in confidence in money. In conclusion, from the inflation theories discussed it is obvious that demand and supply shock can cause inflation, however for these rises in price level to be long term there must be a persistent increase in the quantity of money. The argument between Keynesian and Monetarist economists today is whether the short term effects from economic pressures last long enough to be important and a significant factor in long term inflation. ...read more.