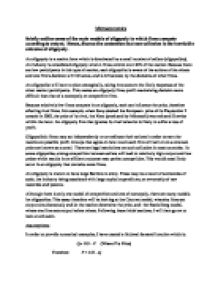 Briefly outline some of the main models of oligopoly in which firms compete according to output. Hence, discuss the contention that non-collusion is the inevitable outcome of oligopoly.

Microeconomics Briefly outline some of the main models of oligopoly in which firms compete according to output. Hence, discuss the contention that non-collusion is the inevitable outcome of oligopoly. An oligopoly is a market form which is dominated by a small number of sellers (oligopolists). An industry is considered oligopoly when 4 firms control over 40% of the market. Because there are few participants in this type of market, each oligopolist is aware of the actions of the others and one firm's decision will influence, and is influenced, by the decisions of other firms. An oligopolist will have to plan strategically, taking into account the likely responses of the other market participants. This makes an oligopoly firms profit maximizing decision more difficult than that of a monopoly or competitive firm. Because relatively few firms compete in an oligopoly, each can influence the price, therefore affecting rival firms. For example, when Sony slashed the European price of its Playstation 2 console in 2002, the price of its rival, the Xbox (produced by Microsoft) was reduced likewise within the hour. An oligopoly firm that ignores its rival behavior is likely to suffer a loss of profit. Oligopolistic firms may act independently or co-ordinate their actions in order to earn the maximum possible profit. ...read more.

Firm A is happy producing the monopoly output, but firm B is not on its best response curve. As the graph above shows, if firm B knows that firm A will sell Qa = 30, firm B will sell Qb=15. In response to this, firm A will cut back production and then firm B will increase theirs. This procedure will continue in they are both at equilibrium. Only at Qa= Qb=20 does neither firm want to change its behaviour. This idea however does rely on the idea of discrete periods. There is substantial evidence to suggest that this is unrealistic and firms adjust output inter-period, generally increasing such that industry output is in excess of the expected Cournot equilibrium (Romano and Yildrim). The Cournot equilibrium can also be solved algebraically. As we know, P = 113 - Qa - Qb The Residual demand line D' is linear with slope -1, and as marginal revenue curves are twice as steep as their corresponding demand curve, the gradient of MR' is therefore -2. The Marginal Revenue function is thus MR' = 113 - 2Qa - Qb Firm A's best response (its profit maximising output), given Qb is the output that equates MR' and MC. ...read more.

"People of the same trade seldom meet together, even for merriment and diversion, but the conversation ends in a conspiracy against the public, or some contrivance to raise prices". This would seem to suggest that collusion is inevitable. However, cartels often fail because either the government forbids them or because each firm in a cartel has an incentive to cheat on the cartel agreement by producing extra output. To sum up the three models, the total Stackelberg ouput , 45 , is greater than both Cournot, 40, and monopoly/ cartel, 30. As a result the Stackelberg price, �68, is lower than cournot, �73 and monopoly/cartel, �83. Thus, consumers prefer the Stackelberg equilibrium to the Cournot equilibrium and the Cournot equilibrium to a monopoly/ cartel here, and in any market where firms have identical cost functions. The combined Stackelberg profit, �675,000, is less than the combined Cournot, �800,000, and monopoly/ cartel, �900,000, profits. The Stackelberg leader though, earns �450,000, which is more than it could earn through Cournot, �400,000. Total Stackelberg profit is less than total Cournot profit because of the Stackelberg follower earning less at �225,000. Although firms would earn more through a cartel, it is difficult to suggest that collusion is inevitable, given the strong financial motivation to cheat on an agreement. However, the large numbers of laws that restrict collusion would surely not exist if it was not for the strong likelihood of it happening. ...read more.