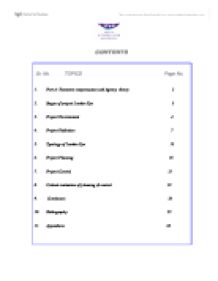 CONTENTS Sr. No. TOPICS Page No. 1. Part A: Executive compensation and Agency theory 2 2. Stages of project London Eye 3 3. Project Environment 4 4. Project Definition 7 5. Typology of London Eye 13 6. Project Planning 16 7. Project Control 21 8. Critical evaluation of planning & control 22 9. Conclusion 24 10. Bibliography 25 11. Appendices 26 INTRODUCTION British Airways London Eye ('LE /The Millennium Wheel') is a remarkable piece of engineering in the heart of London offering visitors, a unique opportunity for a panoramic view of London. The concept of the wheel was an ideal symbol for London in the Millennium - representing the turning of the century. The wheel was an outcome of the united efforts of the project team comprising of Mace Ltd, Tussauds Group, Marks Barfield (the original conceiver of LE) and other specialists from different European nations making this masterpiece truly European. Though the project was agreed to be sponsored by British Airways ('BA') back in 1996, LE was faced with contractual and technical challenges that delayed the project till February 2000. But the wait was worth the discrete experience of the memorable and ecstatic ride at LE. This report discusses the issues central to the concept of planning and control of operations management of LE and analyses the following: > Environment of LE; > Typology of LE; > Definition for the Millennium Wheel. STAGES OF LONDON EYE Every project can be divided into stages for its effective management. For the purpose of this report, project LE has been divided into four stages as discussed (figure 1). STAGES OF LONDON EYE Fig 1 SCANNING PROJECT ENVIRONMENT Project environment comprises of all the factors which may affect the project before, during & after completion. ...read more.

Delivery Phase LE was completed safely and successfully and launched in February 2000 though not as per the predefined strategy but was quite close to the original plan. As a part of the strategy, milestones were set to benchmark the following significant project events. * Birth of original design 1994; * B.A sponsorship -1996; * Design modifications - August 1998; * Entry of MACE - September 1998; * Work initiation - January 11, 1999 (Week 2 of Gantt chart); * Parts arrival - Late May1999- mid July 1999; * Wheel up-ending - August 23, 1999; Deviations from set milestones: There were deviations from set milestones due to unprecedented technical failures and subsequent knock-on effects in terms of project completion time and cost. Examples: > Failure of anchor blockheads (Sept 10, 1999); > Delay of work for 2 days due to protestors ( October 25, 1999) > Safety drill failure during its last 10 hours (December 30, 1999 ) TYPOLOGY OF PROJECT LONDON EYE Typology of project helps to give a rational presentation of the vast range of undertakings where project management principles can be applied. It also gives a clue to the nature of the projects and the difficulties of managing them. According to Slack, N. et al (2001), Typology of a project is according to its complexity in terms of size, value and the number of people involved in the project and its uncertainty of achieving the project objectives of cost, time and quality. Uncertainty particularly affects project planning and complexity particularly affects project control. LE was highly complex project with a medium-high uncertainty level (Figure 5). COMPLEXITY LE was a high value, multi-task and technically innovative project with a highly complex typology (hence appears to the extreme right of the complexity scale). ...read more.

and complexity (affecting control) of operations has been undertaken at the following two stages to demonstrate LE's deviations from original plan and the role of control mechanism thereon. Initiation stage LE had time-bound objectives and clear vision of completing the wheel by the turn of the millennium. LE's operations were relatively certain but highly complex (figure 14). Tasks were well planned and control mechanism was effective through the use of Gantt chart. Execution stage LE experienced technical mishaps and subsequent redesigning of wheel parts, thereby causing the original plan and cost to change, making the project more uncertain (figure 14). Also, the complexity had risen with the re-scheduling of tasks. But the team worked towards the target of completing the wheel by February 2000 without compromising of quality/safety with the help of effective control mechanism and constant monitoring of tasks. CRITICAL EVALUATION OF PLANNING AND CONTROL OF LONDON EYE PROJECT STAGES (Fig 14) CONCLUSION LE is a super success attracting 3.5 million customers (more than projection of 2.2 million). in its very first year of operation helping it achieve an early break-even. Credibility of LE's success is owed to: > Project management team who set an example of a strong partnership; and > Supportive media and people, who encouraged this innovative idea to be turned into a reality. This project is a trend setter for manoeuvring complex multi-task technical projects by effective use of management tools of planning, co-ordination and control. Environmental and technical adversities faced by LE had not marred the team's conviction of inventing the world's biggest wheel. LE was a gift to London that enhanced the city's beauty by its unique shape and design situated on one of the most alluring locations of London, attracting tourists world wide. ...read more.