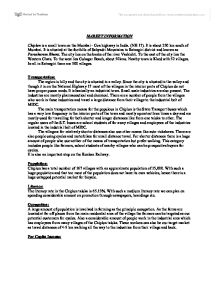 Chiplun is a small town on the Mumbai - Goa highway in India.

MARKET INFORMATION Chiplun is a small town on the Mumbai - Goa highway in India. (NH 17). It is about 250 km south of Mumbai. It is situated at the foothills of Sahyadri Mountains in Ratnagiri district and known as Parashuram Bhumi. The city lies on the banks of the river Vashishti. To the east of the city lies the Western Ghats. To the west lies Guhagar Beach, about 50kms. Nearby town is Khed with 52 villages. In-all in Ratnagiri there are 500 villages. Transportation: The region is hilly and the city is situated in a valley. Since the city is situated in the valley and though it is on the National Highway 17 most of the villages in the interior parts of Chiplun do not have proper pucca roads. It is basically an industrial town. Small scale industries are also present. The industries are mostly pharmaceutical and chemical. There are a number of people from the villages who work in these industries and travel a large distance from their village to the industrial belt of MIDC. The main transportation means for the populous in Chiplun is the State Transport buses which has a very low frequency in the interior parts of the town and mostly operates three times a day and are mostly used for travelling for both shorter and longer distances like from one taluka to other. ...read more.

Among fruits grown are alphanso mangoes and jackfruit. Some parts of villages are also involved in horticulture. Fairs and Festivals: The most widely celebrated festival in Chiplun is Ganesh Chaturthi a 11-day Hindu festival to pay obeisance to the Elephant God, Ganesh. Also Diwali is celebrated with great pomp. These two festivals witness shopping spree among the villagers. Also shopping takes place on a large scale during the harvesting season of March to June. Apart from this there are also Jatras and Dindis which take place in the villages. Media and Communication: Radio is the most widely used media. Also a considerable amount of pople own television sets and apart from doordarshan cable connection is widely available in Chiplun. The main language spoken is Marathi although almost all the people can speak Hindi. Spoken English is a rarity in Chiplun although quite a few people can read the language. The various newspapers available in Chiplun are - dailies like Navkonkan, Ratnabhoomi, Ratnagiri Times, Sagar (Chiplun) and weeklies like - Smanta, Aarsa, Kisansad, Satyashodhak, Balvant, Eakta Sangram (Chiplun), Konkanraja (Dapoli). The city boasts of a sole theatre - Padma Theatre. Commercial: Since the city is on a major National Highway, there are adequate accommodations, including hotels, motels and lodges. There is also a five star hotel - Taj Riverview Lodge. ...read more.