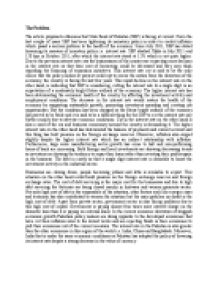 Commentary. The article proposed a dilemma that State Bank of Pakistan (SBP) is facing at current. Form the last couple of years SBP has been tightening its monetary policy in order to control inflation which posed a serious problem to the health of the e

﻿The Problem The article proposed a dilemma that State Bank of Pakistan (SBP) is facing at current. Form the last couple of years SBP has been tightening its monetary policy in order to control inflation which posed a serious problem to the health of the economy. Since July 2011, SBP has stated loosening its measure of monetary policy i.e. interest rate. SBP slashed 50pbs in July 2011 and 150 bps in October 2011, after which the interest rate stood at 12% which is yet quite higher. Due to the previous interest rate cuts the businessmen of the country are expecting more declines in the interest rate so that their cost of borrowing could be decreased and they may think regarding the financing of expansion initiatives. This interest rate cut is said to be the only choice that the policy makers at present could opt to rescue the nation from the downturn of the economy, the country is facing for last few years. This rapid decline in the interest rate on the other hand, is indicating that SBP is considering, cutting the interest rate to a single digit in an expectation of a moderately bright future outlook of the economy. The higher interest rate has been deteriorating the economic health of the country by affecting the investment activity and employment conditions. ...read more.

Government is paying almost four times more interest charge on the domestic loan than it is paying on external loans. In the current economic downturn of sluggish economic growth Pakistani policy makers are doing opposite to the developed economies that have cut their inflation rates to the lowest levels and are injecting funds in their economies to pull their economies out of the current recession. The interest rate in the Pakistan is also greater than the other economies in this region of the world i.e. India, China and Bangladesh. Moreover, India that is under the same economic conditions as Pakistan has adopted the policy of lowering its interest rate despite a strong decrease in the value of currency. So the main problems Pakistan is facing now a days is the sluggish economy which is damaging the industrial and economic growth that in turn causing unemployment and inflation which require tightening of monetary policy which involves increase in interest rate which increase the cost of debt and hinders the industrial expansion and economic growth. SBP is facing the dilemma that whether it should reverse the recent decline in the interest rate to curb inflation or whether it should further decline the interest rate to support investment spending. ...read more.

The argument on the whole is well supported by examples and had a sound theoretical base along with statistical data support where necessary. The author successfully addressed a serious economic issue and recommended the solution as well that satisfies all dimensions of argument by theoretical means which is properly supported by brief reference of examples and by statistical data. The author expressed his opinion by favoring decline in the interest rate. He did not provide any alterative way to tackle the problem. He said that the only way to support the economic activity and create the jobs in the country is to decrease interest rate to promote investing activities. He did evaluate the only option he provided in an objective manner. The other options thus are out of scope as for as this article is concerned. The evaluation of the solution was done as the last possible option and the evaluation seems to be theoretically sound. Further strength to the evaluation has been provided by means of providing the examples and statistical data in the article. Reference of the article Policy rate choice and growth tilt by Nasir Jamal, Published in Economic and Business Magazine , DAWN on November 28, 2011, Retrieved from: http://www.dawn.com/2011/11/28/policy-rate-choice-and-growth-tilt.html ...read more.