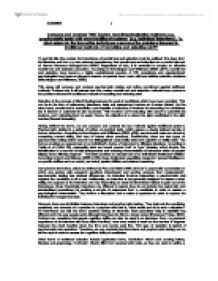 Compare and contrast TWO modern recruitment/selection methods (e.g. psychometric tests) with more traditional systems (e.g. individual interviews). To what extent do the innovative techniques overcome the problems inherent in traditional methods of recruiting and selecting staff? To put this title into context, the importance of recruitment and selection must be outlined. It is clear, from the literature and from my own personal experiences, that recruitment and selection are a crucial element of Human Resource Management (HRM). Regardless of size, it is essential to employ an effective recruitment and selection procedure. According to Marchington and Wilkinson (2002: p277), recruitment and selection have become a highly sophisticated practice of HR; consultants and organisational psychologists have been employed to ensure companies have made valid and reliable selection decisions (Marchington and Wilkinson, 2002). This essay will compare and contrast psychometric testing and online recruitment against traditional methods. Furthermore, it will assess how the modern recruitment and selection methods have overcome the problems inherent in traditional methods of recruiting and selecting staff. Selection is the process of discriminating between the pool of candidates which have been recruited. This can be in the form of references, interviews, tests and assessment centres etc (Lecture Notes). On the other hand, recruitment is essentially a pre-requisite of selection; it involves the searching for candidates (be it internal or external) for job vacancies. This involves communicating with actual or potential job seekers, and motivating them to apply. Hence, the objective is to attract the right candidates in the right number (Brunel University). Having defined the terms, we can compare and contrast the two methods against traditional systems. Psychometric testing is a series of written or practical tests, which assess a clearly defined sample of human behaviour. ...read more.

Having used the new selection methods, West Sussex County Council saw a marked improvement in labour turnover rates as they selected the right candidates for the job (Employers Organisation for Local Government). In terms of accuracy, psychometric testing solves the problems of interviews and references. During an interview, the interviewer must rely on the candidate's honesty in answering certain questions, also many line mangers can write inaccurate references. In cognitive ability tests, mental ability can be measured accurately as the candidate cannot lie about anything. The most the candidate can do is lie (www.Toolpack.com). Meta-analysis demonstrates that psychometric testing scores higher in terms of validity, compared to other selection methods. This analysis is a process of combining many individual studies in order to show a typical picture. One much reported set of findings is that of Dr. Mike Smith of UMIST: (Perfect prediction) 1.0 0.9 0.8 0.7 Assessment centres (promotion) 0.6 Work sample tests 0.5 Ability tests 0.4 Assessment centres (performance), biodata, personality questionnaires 0.3 Structured interviews 0.2 Typical interviews 0.1 References 0 Astrology, graphology (Chance prediction) Fig. 1 (Source: Smith, 1986) From the table it is clear that psychometric testing scores higher in terms of validity compared to interviews. When it comes to solving interview bias, psychometric testing has been criticised for its effectiveness. According to Bach and Sissons (2002), black males do not do as well as others in cognitive tests. As a result, the tests do have an element of discrimination. Also, the premise that personality tests provide a profile of a candidate's personality in order to assess their suitability for the job, results in stereotyping. This does not help solve the problems inherent in interviews. ...read more.

There is no point implementing a sophisticated online recruitment system for a bricklaying company trying to recruit a bricklayer. From the analysis of this essay, online recruitment does go far in solving the problems of traditional recruitment; however, it is not an ultimate panacea for every company concerned, as some organisations do not need it as much as others do. No selection method, unfortunately, can perfectly predict later job success, although some assessment centres can be very good at this. From the analysis, the best single methods, however, are psychometric tests - work sample tests and ability tests. Personality questionnaires, another form of psychometric instrument, can also be very effective. Interviews tend to be less effective, especially the typical biographical interview. Other methods, such as astrology or graphology (handwriting analysis) seem to be no better or worse than chance. Psychometric tests are very popular now, and are very accurate when assessing ability and comparing other candidate's scores. In this regard, they go a very long way in solving the problems inherent in unstructured interviews. However, the vast majority of organisations still use interviews. One can rightly say that structured interviews increase the validity of unstructured interviews, as set questions are asked. Similar to recruitment, an organisation must assess what method is useful for them; there is no point in carrying out psychometric testing for a company trying to recruit a factory worker. In this situation, psychometric testing is no use to the company. However, when used for recruiting graduates, the innovative techniques go far in solving the problems of accuracy and validity. Finally, it is recommended that no selection method should be used on its own. In that sense, psychometric testing is not a panacea to all selection problems; it is only very effective when used as part of a jigsaw combining other methods such as interviews and references etc. ...read more.