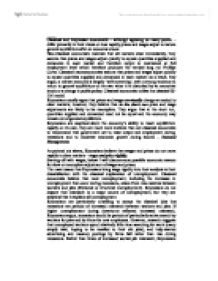 Compare the positions of the New Classicals and New Keynesians regarding: (a) market competition; (b) flexibility of prices and wages and (c) speed of price and wage adjustments.

Keynesians refer to rigidity of nominal prices - tendency of prices to adjust slowly to changes in the economy - as price stickiness. Keynesians believe that another significant weakness of the classical model is the classical prediction that monetary policy is neutral. In the basic classical model without misperceptions, the assumption that wages and prices adjust quickly implies that money is neutral. If money is neutral, an increase or decrease in the money supply changes the price level by the same proportion but has no effect on real variables, such as output, employment, or the real interest rate. However empirical studies have led most economists to conclude that money is probably not neutral in the real world. Classical economists account for monetary non-neutrality by extending the classical model by assuming that workers and firms have imperfect information about the current price level - the misperceptions theory. Keynesians on the other hand explain monetary non-neutrality by saying that if prices are sticky, the price level cannot adjust immediately to offset changes in the money supply, and money is not neutral. The Keynesian explanation for the existence of price rigidity relies on two main ideas: (1) most firms actively set the prices of their products rather than taking the prices of their output as given by the market; and (2) when firms change prices, they incur a cost, known as a menu cost. Generally, a situation in which all buyers and sellers are price takers is called perfect competition. ...read more.

the equilibrium is at, e. So the results of the unexpected increase in demand: Employment is above the full employment level, y. Prices are also higher (110 < 113 < 115). This is what one would expect from the PC: a negative relation between inflation and unemployment. Therefore, Friedman and Phelps argue that the PC only holds if demand changes unexpectedly. However this cannot continue for long. The excess of demand over supply leads to increased prices and suppliers soon move back to y. In the long run the economy cannot stay away from y for long. Friedman and Phelps, giving the above reasoning hypothesized the, Expectations augmented PC. The expectations-augmented PC implies that, the actual unemployment rate equals the natural unemployment rate. Therefore, the actual unemployment rate equals the natural rate in the long run regardless of the inflation rate maintained. Thus the long run Phillips curve is vertical. The vertical long-run PC is related to the long-run neutrality of money. Classical and Keynesian economists agree that changes in the money supply will have no long-run effects on real variables, including unemployment. The vertical long-run PC carries the notion of monetary neutrality one step further by indicating that changes in the growth rate of money, which lead to changes in the inflation rate, also have no real effects in the long-run. Classical economists say that there is monetary neutrality. A change in the nominal money supply changes the price level proportionally but has no effect on real variables. Therefore a monetary expansion is rapidly transmitted into prices and has at most a transitory effect on real variables; i.e. the economy moves quickly from situation to situation / equilibrium to equilibrium - prices adjust quickly. ...read more.