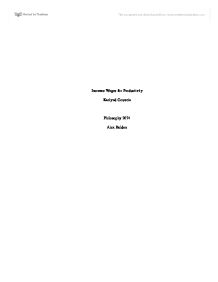 Increase Wages for Productivity Kaelynd Gouveia Philosophy 2074 Alex Beldan This paper will discuss the viability of increasing wages to attain higher productivity rates in the workplace. I will argue that implementing a wage increase for current employees will not necessarily result in higher productivity and that productivity is more so a function of innate skills and abilities than pay rate. Costco claims they receive high productivity rates in return for paying their employees high wages. This does not necessarily mean that implementing a wage increase at a chain like Sam's Club, owned by Wal-Mart, for current employees will provide the same productivity results. Currently Wal-Mart and its subsidiaries operate on the mission of "Always Low Prices, Always" (81). Wal-Mart achieves these low prices through "low wages for its employees, unrelenting pressure on suppliers, products cheap in quality as well as price, (and) offshoring jobs"(81). Cascio argues that there may be an alternative to the way that Wal-Mart runs it's business where they are able to offer low prices while paying employees well and providing desirable returns for shareholders (81). ...read more.

Cascio argues that Wal-Mart need not pay their employees low wages to keep shareholder returns high and suggests that by paying their workers higher wages they should be able to reap the benefits of more productive workers (82). This argument is flawed especially if productivity is viewed as a function of innate ability instead of pay. It is possible that Wal-Mart is able to employ workers at a lower wage than Costco because the pay matches a more inferior set of skills and abilities that their employees have explaining why the people they hire are willing to work at this wage. If this is the case then giving a pay raise, as it will not specifically increase workers' skills, may not result in an increase in productivity for Wal-Mart. If Wal-Mart were to increase pay without seeing an increase in productivity it would lose profits resulting in a lower return for shareholders, something that would be seen as an irresponsible and unethical decision for a public company whose duty is to create value for shareholders. ...read more.

Also, by employing new, more productive workers, the average skill level of the workers hired at Wal-Mart will change meaning that an outlet of employment for lower skilled workers has been taken away and may result in higher unemployment for people who fall in this skill level. If unemployment rates for less skilled workers were to increase it might cause an excess need for social welfare programs. Essentially, if Wal-Mart changed it's hiring practices to employ more skilled workers they may take away jobs from people currently qualified to work there, possibly hurting communities it chooses to locate itself in if. Although Costco may believe that it sees high productivity rates because of its high wages it may not be easy to implement this in already existing workplaces. It would be socially irresponsible of Wal-Mart to increase wages if it resulted in angering current employees, taking jobs away from them, or increasing the need for social welfare in communities that it operates within. Although there may be an alternative to the way that Wal-Mart operates in creating low prices for consumers, a wage increase for employees in expectations of higher productivity is not the best solution. ...read more.