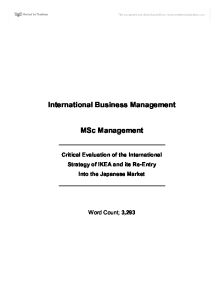 International Business Management MSc Management Critical Evaluation of the International Strategy of IKEA and its Re-Entry Into the Japanese Market Word Count; 3,293 Critical Evaluation of the International Strategy of IKEA and its Re-Entry Into the Japanese Market Introduction Ingvar Krampard founded IKEA in 1943 and began operations purchasing and selling on stationary out of his family kitchen (Bartlett et al., 2008). IKEA is now the worlds largest furniture retailer posting global sales of �21.2 billion for the financial year 2008/2009 (Wearden, 2009). IKEA currently owns 267 stores across 25 countires, whilst a small number are owned and run by franchisees (IKEA.com). IKEA was chosen as it seems to break all the rules of previous retail literature, and has experienced success worldwide in different markets with a standardised retail product. However IKEAs entry into Japan will be the focus for analysis. In 1974, during the early years of its global expansion, IKEA entered Japan launching a franchising deal, only having to withdraw twelve years later in 1986 due to poor sales (Wijers-Hasegawa, 2006). However in April 2006, twenty years later, IKEA once again entered Japan by opening a store in Fanabashi on the outskirts of Tokyo (Jonsson, 2007). Japan was therefore chosen in order to attempt gain a deeper understanding as to why various strategies may not work across nations. The theoretical focus of the article will be on the process of IKEAs internationalization, drawing from the literature carried out by Johanson & Wiedersheim-Paul (1975) and Johanson & Vahlne (1977) and the Uppsala model. The article will also critically evaluate IKEAs current international strategic orientation and its suitablility for the Japanese market, considering the Intergation-Responsiveness (I-R) framework proposed by Bartlett & Ghoshal (1989). Based on the findings from the analysis suitable conclusions and strategic recommendations will be made. Critical Literature Review The Uppsala Model of Internationalization The Uppsala model was developed between 1975 and 1977 by Jan Johanson, Finn Wiedersheim-Paul and Jan-Erik Vahlne at the University of Uppsala (Tayeb, 2000). ...read more.

IKEA's International Strategy Despite the furniture retail industry experiencing relatively low globalization drivers (Yip, 1995), IKEA has managed to expand globally into the largest furniture retailer in the world (Betts, 2006). Bartlett et al. (2008) describe how various companies can encourage the global evolution of a particular industry by finding ways around the various barriers to globalization. IKEA opened its first retail store in 1951 in Almhult, Sweden and was an immediate success (Bartlett et al., 2008). However it wasn't until 1953 that IKEA revolutionised furniture retailing through its "knockdown" concept, which would ultimately be its platform to global success. IKEA "managed to redesign the entire furniture industry" (Arvidsson, 1997, p.85) through its flat packed product that customers transport home and assemble themselves. IKEA therefore managed to avoid two of the most expensive activities of traditional furniture retailers, assembly and home delivery (Bartlett et al., 2008). Bartlett et al. (2008) describe how IKEA created a completely new business model which allowed them to transport its products globally more cost-effectively than competing retailers, and one that transformed its value chain. The value chain approach identifies primary and secondary activities in the firm. Primary activities include inbound and outbound logistics, operations, marketing and after-sale functions. Secondary activities, on the other hand, are identified as support processes to primary activities (Bartlett et al., 2008). Porter (1985) proposed that firms could gain competitive advantage over its competitors by adding as much customer value in each of the primary activities by performing them at lower cost or in a unique way. Rugman (2000) describes how by providing flat-packed products that consumers transport and assemble themselves integrates the customer in the value chain process (see figure 5). This obviously saves on transportation and assembly costs, but also means the customers add value to the chain rather than consume it by providing labour and transportation. This added value is visible to the customer in the end product through IKEAs low prices (Arvidsson, 1997). ...read more.

Using the Uppsala model of internationalisation, the global expansion process of IKEA into the worlds largest furniture retailer has been analysed. Despite not fitting the theoretical model exactly, many of the key themes and concepts were apparent in IKEAs early expansion. Also the model made some contribution in evaluating IKEAs failure to capture the Japanese market on its first entrance in 1974. Using the I-R framework proposed by Bartlett & Ghoshal (1989) IKEA was found to be orientated towards a global strategy. IKEA seemed to be experiencing few pressures for local responsiveness, but aiming for maximum global integration of its standardised products to further reduce costs (Rugman, 2000). Twenty-years after exiting the Japanese market, IKEA decided to re-enter in 2006 via a major Greenfield investment and now currently owns four other stores. One would suspect it is still early days to make a judgement on IKEAs performance to date, however some recommendations can be presented to attempt to ensure IKEAs re-entry is sustainable. Research would suggest that, despite there being some evidence of global convergence of consumers tastes (Levitt, 1983), customer attitudes in Japan are still largely different to that of the Western world (JETRO, 2009). Rugman & Hodgetts (2003) emphasise that successfully foreign owned MNCs appreciate that products must be tailored to suit the Japanese market. It is recommended that IKEA should slightly re-engineer certain products to better suit the Japanese small, uncluttered, minimalist space approach (Betts, 2006). This could be done by responding more openly to local responsiveness, and slide closer over to a transnational strategy in the I-R matrix. IKEA could also learn from cases such as Toys "R" Us who faced the same problem in transferring their global standardised business model to the Japanese market. Toys "R" Us formed a strategic alliance with Den Fujita, who applied his local cultural knowledge and powerful opinion leader position to shape and streamline the Toys "R" Us strategy to best fit the Japanese market. ...read more.