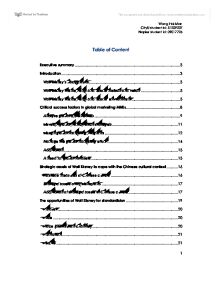 Table of Content Executive summary 3 Introduction 3 Walt Disney's background 3 Walt Disney theme parks and resorts mission and vision 4 Walt Disney theme parks and resorts' environment 5 Critical success factors in global marketing MNEs 7 Analyze global opportunities 9 Develop global participation strategies 10 Design global marketing programs 11 Manage the global marketing effort 13 Adaptation 14 A need for global mindsets 14 Strategic assets of Walt Disney to cope with the Chinese cultural context 14 Hofstede measures of Chinese culture 15 Strategic assets of HK Disneyland 15 Adaptation of strategic assets in Chinese culture 16 The opportunities of Walt Disney for standardision 18 Product 18 Price 19 Place (distribution channel) 19 Promotion 19 People 19 Process 20 Physical evidence 20 Recommendations 20 Conclusion 21 Appendices 21 Bibliography 30 Executive summary Disney is one of the multinational enterprises operating all around the world. Recently, it is a successful company, its critical successful factors of global strategies of Disneyland and its standardisation and adaptation of marketing mix would be discussed. Upon reviewing the global development of Disneyland, they have experienced some cultural difficulties especially in Paris and in Hong Kong. Disney has continuously put effort to solve those problems and improvements could be shown, thus it continue to expand its business of Disneyland and the new branch of Shanghai Disneyland would be opened by 2015. And the new branch should make use of the critical success factors and cultural bias happened before and the existing marketing mix to formulate its marketing plan and strategies. Introduction Walt Disney's background Walt Disney Company was found in 1932 and it has five major business segments which include Media Networks, Parks and Resorts, Studio Entertainment, Consumer Products and Interactive Media. (Walt Disney, 2010) The report would be focus on the segment of Walt Disney Theme parks and Resorts which is operated by Walt Disney Company. ...read more.

Thus the operation style of information centres and agents would not be the same. For example, Disneyland's tickets could be picked up in convenience stores in HK as HK people's life style is fast and do not want to wait. However, in other branches of Disneyland would not have such strategy. Adaptation is needed in different countries to convince the customers. Promotion It is less likely to standardise the promotion of Disneyland as the advertising, public relation need to adapt to local culture and living styles as customers' behviours are not the same in different counties. In addition, the media response rates are different in different countries thus different media would be chosen. People People could not be standardise in different country markets due to heterogeneity. Even Disneyland had the employee book for employees to follow, people's problem handling skill might not be the same and the staff reactions for some incident might not be the same. Process The process of Disneyland is most likely to be standardise as the flow of service are similar no matter in different countries. For example, the parades and fireworks are standardised as easy management would take in advance. There are slight customisation by the time of fireworks and the languages used in the parades. Physical evidence The physical evidence is likely to be standardised by the parades, unique characters and the castles. However, some zones and facilities are not the same among different branches. For example, "it's small world" in HK Disneyland is not in other branches. Recommendations After investigating the critical success factors, cultural adaptation and marketing mix of existing Disneyland, recommendations would be formed by suggesting the coming new branch- Shanghai Disneyland to learn from the past issue of cultural bias and existing marketing programs as to form a more comprehensive marketing programs. In addition, existing Disneyland have not employ all critical success factors, it need to consider whether to employ the remaining two factors or not leading to be more successful in expansion. ...read more.

Main Street U.S.A. will also be filled with other live entertainment throughout the day, with traditional and modern Chinese New Year-themed performers including Drummers and Lion Dancers spreading joy and happiness all around. Hong Kong Disneyland will offer a complete Chinese New Year experience with delicious specialty food items from traditional Chinese snacks to the most elaborate sit-down dinner, available throughout the Park and at the two Disney-themed hotels. Guests can bring home the best of luck with 88 "Mickey Family in the Year of Tiger" merchandise items, and 18 exclusive items from the "Hong Kong Disneyland Exclusive KxM collection" designed by Kelly Chen including unique clothing and accessories for women. The Park will also offer a range of Valentine items to celebrate the season of love! The Park will transform into the Happiest Land of Fortune with decorations in colors that symbolize good luck. The Gods of Prosperity, Happiness and Longevity will be in the Park to wish everyone a good beginning to the Year of the Tiger. Those who want to challenge their artistic talents can go to the Animation Academy to draw Mickey, Donald and Tigger in their Chinese New Year costumes. From February 5 to 28, Guests can make their very own Chinese New Year Decorations at the Kids' Zone in Fantasyland every Saturday and Sunday. From the first day of Chinese New Year (February 14) to February 18, everyone will receive a Laisee with a large chocolate gold coin upon entering the Park. To take part in the lucky Year of the Tiger Celebration, Guests can purchase tickets at the Ticket Booths in the Main Entrance of the Hong Kong Disneyland Park, front desks of the Hong Kong Disneyland Hotel and Disney's Hollywood Hotel, The Magic of Hong Kong Disneyland at Hong Kong International Airport, Hong Kong Disneyland Ticket Express at MTR Hong Kong Station, selected Circle K outlets and online at www.hongkongdisneyland.com. Please call (852) 1-830-830 or visit www.hongkongdisneyland.com for more ticketing details of the Year of the Tiger Celebration at Hong Kong Disneyland. http://news-en.hongkongdisneyland.com/PressReleases/PressReleaseDetail. ...read more.