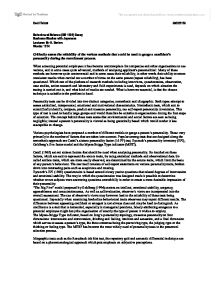 Critically assess the reliability of the various methods that could be used to gauge a candidate's personality during the recruitment process.

Behavioural Science (BS 1525) Essay Business Studies with Japanese Lecturer: Mr H. Barton Words: 1374 Critically assess the reliability of the various methods that could be used to gauge a candidate's personality during the recruitment process. When screening potential employees it has become commonplace for companies and other organisations to use various, and in some cases quite advanced, methods of analysing applicant's personalities'. Many of these methods are however quite controversial and in some cases their reliability, in other words their ability to return consistent results when carried out a number of times on the same person (repeat reliability), has been questioned. Which one of the plethora of research methods including interviews, questionnaires, observation, case studies, action research and laboratory and field experiments is used, depends on which situation the testing is carried out in, and what kind of results are needed. What is however essential, is that the chosen technique is suitable to the problem in hand. Personality tests can be divided into two distinct categories, nomothetic and idiographic. Both types attempt to assess attitudinal, interpersonal, emotional and motivational characteristics. Nomothetic tests, which aim to scientifically identify, compare, predict and measure personality, use self-report personality inventories. This type of test is used to handle large groups and would therefore be suitable to organisations during the first steps of selection. ...read more.

The MTBF has become the most widely used of personality tests in the personnel selection process. Idiographic tests such as the Rorschach ink blot test, the repertory grid and semantic differential technique are based on a phenomenological approach which puts emphasis on subjective perceptions. Psychometric personality tests are useful in that they are easy to administer and the data gained from them can be quickly and effectively quantified and also accessed easily at a later date. Although these tests are used widely during personnel selection, there are a number of problems surrounding personality testing. The most common of these is faking, i.e. not truthfully answering the questions and instead second guessing which answers are desirable, in order to better his chances of getting the job. Research done by Poppleton (1975) showed that applicants exhibited precisely this behaviour and lied when filling out Cattell's 16 PF test. Further research seems to prove that when tests are taken purely for the purpose of self-evaluation and not as part of the recruitment process, subjects generally answer questions truthfully (Tiffin and McCormick, 1969). Methods such as forced-choice techniques or "lie scales" have been devised to combat cheating in tests. These involve posing questions in such a manner so that someone trying to falsely create a more positive picture of his personality could be easily identified. ...read more.

Mischell (1968) suggested that interviews may be misleading, in that people change their behaviour depending on the situation they are in. Mischell stated that it is less personality traits, but instead to a greater extent the situation that defines how a person will behave. This would contradict the theory that personality is consistent, and mean that one cannot accurately predict someone's behaviour by analysing their personality. Further methods of analysing personality such as graphology play only a minor role as they are seen by many as having very little or no scientific basis. Personnel selection is on of the most difficult parts of management. As well as a potential applicants CV and track record, any further input is likely to improve the selection process. Organisations must however be aware of the disadvantages and shortcomings of the various methods of personality testing. Based on the findings of research done to date, placing to greater emphasis on psychometric testing would not be advisable as these methods are to prone to cheating. In the light of the increasing competition among job applicants, relying on their truthfulness is probably unwise. Instead selectors should endeavour to collect information from as many sources as possible as this increases the likelihood of creating a balanced and accurate assessment of a person's suitability for a job. ...read more.