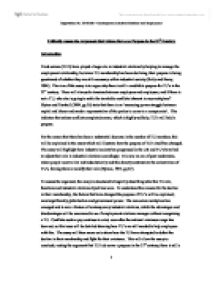 Critically Assess the Argument that Unions Serve no Purpose in the 21st Century Introduction Trade unions (TU's) have played a huge role in industrial relations by helping to manage the employment relationship, but since TU membership has been declining, their purpose is being questioned of whether they are still necessary within industrial society (Kelly and Heery, 1994). The aim of this essay is to argue why there is still a creditable purpose for TU's in the 21st century. There will always be tensions between employees and employers, and if there is not a TU, who else is going to settle the inevitable conflicts inherent in any workplace? Blyton and Turnball (2004, pp.35) state that there is an 'unceasing power struggle between capital and labour and needs a representative of the parties to come to a compromise'. This indicates that unless conflicts completely cease, which is highly unlikely, TU's will hold a purpose. For the reason that there has been a substantial decrease in the number of TU members, this will be explained in the essay which will illustrate how the purpose of TU's itself has changed. The essay will highlight how industrial society has progressed in the UK and TU's have had to adjust their role in industrial relations accordingly. It is now an era of post-modernism; where people want to live individualistically and this directly contrasts to the collectivism of TU's, forcing them to modify their role (Hyman, 1975, pp.67). To assess the argument, the essay is structured to begin by describing what the TU role, functions and industrial relations objectives were. To understand the reasons for the decline in their membership, the factors that have changed the purpose of TU's will be explained; most significantly globalisation and government power. The non-union workplace has emerged and is now a feature of contemporary industrial relations, which the advantages and disadvantages will be uncovered to see if employment relations manages without recognising a TU. ...read more.

The purpose of restricting the TU's activities was so that individualism was being promoted which goes against collective bargaining, which is at the heart of the union-employee relationship. It is true for Taylor (1993, pp.319) to say Thatcher's aims had 'no obvious role for trade unions at all'. The reason that Thatcher was so against TU's was because she believed that 'there is no such thing as society; there are individual men and women' (Edwards, 1995, pp.337). She wanted to assert individualistic rather than collective values so that people could operate more freely and to become a more liberal nation. A step into this direction was by reasserting employer power so that they could operate how the wished and this links back to globalisation. Since globalisation bought in more foreign competition, by 'freeing employers from abuses of union power' allowed them to conduct business to their best ability so that they had a competitive advantage (Edwards, 1995, pp.275). This allowed Britain to take advantage of globalisation to become a strong economy and competitive in the international environment, which was previously believed to be restricted because of TU's. To help regulate firms, laws were passed to support the non-union workplace from the 1980s onwards. However, the labour party have now been in power since 1997 and have conceded more laws to support TU's. There have been recognition rights passed to help TU's have an opportunity to recruit members in the workplace, since a reason the decline continued was because employees had not seen an opportunity to become TU members (Blyton and Turnball, 2004). Also, since strikes had been severely restricted when the conservatives were in government power, there had been less media coverage of industrial action and potential members did not see an opportunity to join. However, the labour government have now also passed laws so that employees cannot be so easily dismissed for participating in strike action which Salamon (2000, pp.452) ...read more.

The reasons for their decline in membership that had triggered this argument were explained, establishing that the TU's had lost their members due to globalisation but were even more restricted when the conservatives had power in government. This did not prove the TU's no longer served as a purpose but showed that they had to modify how they operated and that their purpose altered - as Heery (2005) states, unions have to reflect the changing compositions of the workforce. The issue of pay is evidently still an issue in contemporary industrial relations and employment, a ceaseless conflict between industry and society. The TU's campaign for fair pay has been successful with the application of the NMW which they need to ensure is being conformed to, especially by neo-liberal employers. There are also other concerns that have arisen and this is in the non-union workplace. Although management practises have improved, it has been found that employers indirectly exploit employees and as a result, TU's now campaign on their behalf. The strategy taken by TU's to combat their declining membership helped to slow the decline and it was stated by Waddington (2004) that there had even been an increase. This certainly indicates that as the restrictions on TU weaken, potential members and even managers are able to see the purpose of TU's once more. Currently, potential members are dissuaded to join TU's because there is less union presence in the workplace (Whitston and Waddington, 1994). Women have a higher employment rate than men nowadays and still experience inequality in the workplace yet they tend not to join TU's, and therefore are potential TU members (Whitston and Waddington, 2004, pp.38). The new concerns bought by globalisation, the non union workforce and the NMW are now the reasons why TU's still have a purpose and with increased recognition, they will be able to represent more members. So although we live in an individualistic society, TU's will be able to succeed in the collective environment that still exists (Blyton and Turnball, 2004). ...read more.