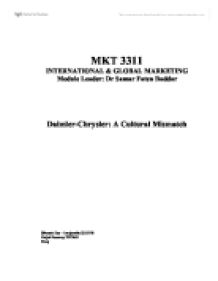 MKT 3311 INTERNATIONAL & GLOBAL MARKETING Module Leader: Dr Samar Faten Baddar Daimler-Chrysler: A Cultural Mismatch Silvesta Ese - Imajemite 2311778 Hajot Deooray 2217461 Ozzy Executive Summary: The merger of Daimler-Benz (the manufacturer of Mercedes-Benz) (Germany) and the Chrysler Corporation (USA), is classed as a cross-culture merger. A cross-cultural merger is the process of two companies from different backgrounds and with different practices were joined together to form one successful company. There were many different reasons why a cross-culture merger is not successful. Daimler-Chrysler failed to analyse both companies before they went ahead with the merger. The main reason that their merger was not successful was that the German way of business and the American ways differ profoundly. Both companies should have been analysed to examine their strengths and weaknesses, in regards to their practice. The communication between both companies lacked and therefore no common ground was found. A merger is the process of two or more entities combining into one for the hope of increasing market share. This process can be achieved by a company merging with or acquiring their competitors. This process has become quite common over the years. Differences in culture, language, and business practices can prove a liability. In most cases, mergers are claimed to be a partnership of two equal businesses but this may not always be the cases. Some companies may acquire companies that are under-performing in a mutual market. Companies may indulge in such a process to increase customer share or to avoid costly marketing battles. Co-CEO of Daimler Chrysler stated that the deal was never expected top be a merger but more Daimler-Benz were acquiring Chrysler. Looking can the histories of both Daimler-Benz and Chrysler, Its clear to see that Daimler Benz were the bigger company as Mercedes-Benz's are manufactured in no less than 13 different countries including Thailand, UK, and Argentina. In regards to sales revenue Daimler- Benz outperformed Chrysler as the Chrysler Corporation Had experienced hard times in the early 1990's. ...read more.

Several years after the merger, we can say that majority of solutions were not effective and have to be solved in a better way as they contributes to separate the two companies. The integration must continue as the process to form a "Welt AG" is not complete. This merger is still controvert as today Schrempp is accused of cheating on the real nature of the merger to avoid to pay a higher price to work with Chrysler. Daimler Chrysler also acquired 34% of Mitsubishi in order to conquer the Asian Market. But we can wonder how can Shrempp get along with three companies when he was not able to deal with two. Question 2 Harjot Deooray 2217461 Many a cross culture merger has failed because proper attention was not given to the differences in cultures between the two companies. What issues should be addressed to make cross culture merger a success? This section of the report will be aimed at looking into cross-culture mergers, specifically at what's important to make such merger successful. A merger is a combination of two companies into one larger company. A merger can resemble a takeover but result in a new company name (often combining the names of the original companies) and in new branding. The merger of Daimler-Chrysler is known as a cross-culture merger, which means that the joining of two different ways of corporate cultures were put together to form one successful unit. In a merger, 'culture' is more than making the people from both partners work together smoothly. The development of a new, shared culture is a critical factor for a successful merger. Daimler-Chrysler was formed in 1998 by the merger of Daimler-Benz (the manufacturer of Mercedes-Benz) (Germany) and the Chrysler Corporation (USA). The transaction was announced on May 7, and took place on November 12. The company produces cars and trucks under the brands Chrysler, Dodge, Jeep, Mercedes-Benz, Smart, and MayBach, among others. ...read more.

Looking at both of the company's successes over the years, it would be fair to suggest that Mercedes Benz was the bigger brand according to global sales revenues, Product range, Mercedes had much more manufacturing plants globally compared to that of Chrysler. However, Chrysler was up and company and they may have believed that on present form they were as big as Mercedes. The issue of control was another important aspect of the merger. Initially when the companies had come together, Jurgen Schrempp (CEO of Daimler- Benz) and Robert Eaton (CEO of Chrysler) both led the entity as co- CEO's. This would suggest that the merger was indeed a partnership. It is important to notice that when Chrysler under- performed in 2000, their president, James P Holden, was replaced with Dieter Zetsche from Germany. A few senior Chrysler executives had already left by this point and it was becoming apparent that more German executives were joining Chrysler in senior positions. Not all mergers are the combination of two equal companies. The bigger company of the entities involved may see their role as acquiring the small entity. Likewise, the smaller company may see the merging process as a way of gaining company growth by tying themselves to a bigger company. One company may always be bigger than the other. In regards the case between Daimler Chrysler, Daimler may have seen the vision of acquiring Chrysler for the motive of further market growth and profit as Chrysler was beginning to show potential growth. Recommendation: The Daimler-Chrysler merger should have begun with a strategy, to decide if they wanted to combine the two different cultures, or start off with one brand new one. To do this they should have analyzed the existing cultures, to establish the similarities and the differences. The two different practices could have worked in certain aspects of the company, if the merger was thought out thoroughly then they could have stuck with certain ways. Any gaps that were noticeable should have been filled so that no hostility was left between the two. ...read more.