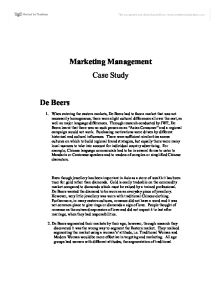 Marketing Management Case Study De Beers 1. When entering the eastern markets, De Beers had to face a market that was not necessarily homogenous; there were slight cultural differences all over the east, as well as major language differences. Through research conducted by JWT, De Beers learnt that there was no such person as an "Asian Consumer" and a regional campaign would not work. Purchasing motivations were driven by different historical and cultural influences. There were sufficient similarities across cultures on which to build regional brand strategies, but equally there were many local nuances to take into account for individual country advertising. For example, Chinese language commercials had to be in several forms to cater to Mandarin or Cantonese speakers and to readers of complex or simplified Chinese characters. Even though jewellery has been important in Asia as a store of wealth it has been truer for gold rather than diamonds. Gold is easily tradeable on the commodity market compared to diamonds which must be valued by a trained professional. De Beers wanted the diamond to be worn as an everyday piece of jewellery. However, very little jewellery was worn with traditional Chinese clothing. ...read more.

This setting is larger than normal designs and made it impractical for daily use. In addition, the large design of the ring might not be fashionable to some modern women who would want more modern designs. Furthermore, an expensive diamond is not something Asian women would risk wearing on a daily basis. 4. De Beers was entering a market rich in culture and history, and diamond rings were not a part of that culture. In the beginning, De Beers focused on selling its diamonds rings as engagement rings in Japan and encouraged them as a sign of love. In Japan the ideal entry point was the Yuino, the traditional Japanese engagement ceremony. Even though the institution of arranged marriages had declined, more than three quarter of the couples getting married went through a yuino ceremony. Traditionally the custom of exchanging rings was not practiced, however, in a post war Japan infatuated with everything Western, the ring was now common practice. De Beers capitalized on this custom and profited from high diamond sales in Japan as the Japanese families realised the status value such a ring endowed, a family that gave a diamond to the bride on during the yuino was obviously a well to do family. ...read more.

The main marketing in China was married women. Research showed than 80% of diamond purchasers were married women in the age range of 25 - 44 years who had not received a diamond wedding ring. The campaign for these women was Xing fu meaning fortunate. The Xing fu campaign focused on promoting the diamond as a status symbol and the ultimate luxury for a woman who has it all, i.e. is a wife, mother, friend and attractive. The diamond a rare and beautiful stone symbolized reaching the ultimate state of life. De Beers in China have developed an extremely good campaign based on a good research. They managed to find the two main target markets, and understand the attitudes of these markets. De Beers positioned diamonds as the ultimate luxury and status symbol in the minds of the heartless and materialistic Chinese population. The campaign has obviously worked very well as in only five years after entering the Chinese market, one-third of the brides in Shanghai and half of the brides in the Rmb 2,000 and above monthly income bracket were receiving a diamond ring on their wedding day. Furthermore, the 88% of elite women population in Beijing, Shanghai and Guangzhou had diamond rings, and many were multiple owners, this is more than in the United States. ...read more.