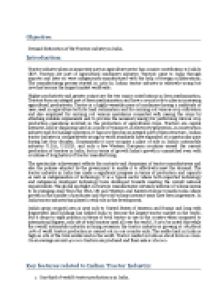 ﻿________________ Objective: ________________ Demand Estimation of the Tractors industry in India. Introduction: ________________ Tractor industry plays an important part as agriculture sector has a major contribution to India?s GDP. Tractors are part of agricultural machinery industry. Tractors came to India through imports and later on were indigenously manufactured with the help of foreign collaborations. The manufacturing process started in 1961-62. Indian tractor industry is relatively young but now has become the largest market worldwide. Higher productivity and greater output are the two major contributions in farm mechanization. Tractors form an integral part of farm mechanization and have a crucial role to play in increasing agricultural productivity. Tractor is a highly versatile piece of machinery having a multitude of uses, used in agriculture both for land reclamation and for carrying out various crop cultivation and also employed for carrying out various operations connected with raising the crops by attaching suitable implements and to provide the necessary energy for performing various crop production operations involved in the production of agricultural crops. Tractors are capital intensive, labour displaying used as a mode of transport, in electricity generation, in construction industry and for haulage operation. It has now become an integral part of farm structure . Indian tractor industry is comparatively young by world standards have expanded at a spectacular pace during last four decades. Consequently it now occupies a place of ride in India's automobile industry. U.S.A., U.S.S.R. and only a few Western European countries exceed the current production of tractors in India, but in terms of growth India's growth is unmatched even with countries of long history of tractor manufacturing. ...read more.

Change agricultural output (Agri GDP). 3. Continuous hike in MSP for all key crops like wheat, paddy, sugar cane, cotton. 4. Increase in Credit flow to agriculture Sector. 5. Scarcity of farm labour especially during the sowing season. 6. Increase in credit flow to agriculture. 7. Increase in non-agri application of tractors as in infrastructure projects. 8. Growth in niche power segments (<20HP and >50HP) and untapped territories. 9. Healthy export sales. 10. Spending of Government of India on Agriculture and allied activities. 11. Increase in Food inflation. 12. Tightening of Vehicle financing interest rates by RBI. 13. Monsoon Rainfall. 14. Average life cycle of Tractor. 15. Increase in exports. 16. Fuel Price. 17. Change in steel price. 18. Arable land. 19. Real estate growth and hence more demand for industrial tractors. But of all these factors we have considered the following mentioned factors which significantly affected the demand of tractors: 1. Area under cultivation: The percentage of area under irrigation is particularly high in states such as the Punjab (98% under irrigation), Haryana (88.5%), Uttar Pradesh (74.9%) and Bihar (63.1%), which have amongst the largest population of tractors in the country. The ability of a farmer to invest in farm mechanisation is also contingent on the cash flows from the crop. Nevertheless, India has experienced healthy monsoon rainfall over the last few years, which has certainly helped rural prosperity. 1. MSP of sugarcane, wheat & paddy : Improvement in rural liquidity on the back of increase in minimum support prices (MSP) offered by the government as evident from the charts below. ...read more.