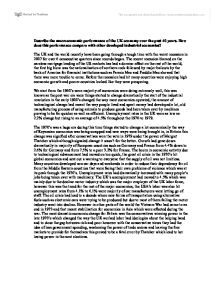 Describe the macroeconomic performance of the UK economy over the past 40 years. How does this performance compare with other developed industrial economies?

Describe the macroeconomic performance of the UK economy over the past 40 years. How does this performance compare with other developed industrial economies? The UK and the world recently have been going through a tough time with the worst recession in 2007 for over 6 consecutive quarters since records began. The recent recession blamed on the careless mortgage lending of the US markets has had a domino effect on the rest of the world, the first big blow was the nationalization of northern rock followed by major bailouts by the bank of America for financial institutions such as Fannie Mae and Freddie Mac showed that there was more trouble to come. Before the recession had hit many countries were enjoying high economic growth and poorer countries looked like they were prospering. We start from the 1960's were majority of economies were doing extremely well, this was known as the post war era were things started to change dramatically the start of the industrial revolution in the early 1900's changed the way most economies operated, the amount of technological change had meant the way people lived and spent money had developed a lot, old manufacturing process of using animals to produce goods had been taken over by machines proving to be far quicker as well as efficient. ...read more.

as well as having high interest rates however the only great change came when a new president was elected his ideas on supply side policies meant that people were taxed less and due to this idea people were enticed to work more for longer hours which would result in saving and investment and that is what recovered the US economy back in the 1980's. Further the president also felt that not enough had been done to secure defense in the US after the Vietnam War and spent more on defense this extra spending lead to the US debt to be greater but did result in a better economy and the US getting out of a recession. Much of Europe was also in the same state as the UK and the US however Japan wasn't as bad its productivity had gone up by double and had annual growth of up to 5% a year which was due to its mass manufacturing in consumer electronics such as computers, that was mostly the case in the continent of Asia due to the big amount of populations and cheap labor available most countries and businesses sent their production to countries such as Malaysia and Singapore which were thriving at the time were more western economies were struggling, as their inflation rates were stable their economic growth was steady and higher then European countries and were also boasting lower unemployment rates than them too. ...read more.

That's the same reason that Japan has also been able to stay at the top although it started very badly it is the second largest economy after the US and is very surprising due to its size in comparison. It has the smallest government compared to the rest of the developed countries and holds the second largest stock exchange it's mainly thanks to its technological advancement in the motor industry and consumer electronics as well as telecommunications. Germany has been a quite economy since World War 2 it has struggled to keep its economy up but due to its strict law and regulations has been able to keep an eye on its economy better and has been able to rectify and mistakes before they create consequences. Lastly the United Kingdom has gone through a lot from the 1960's to what it is today the government has had a major role to play with its economy from the decisions of Margret Thatcher of leaving the free market as it is and developing the French ideology of Laissez-faire. To the changes made by the memorable Tony Blair such as nationalizing many institutions and selling other things such as utilities to private companies to make sure that the consumer is always getting the best price until recently the economies have been doing pretty well but even after the recent recession it still looks like its stabilizing to have lower unemployment, steady inflation and steady economic growth over the years to come. ...read more.