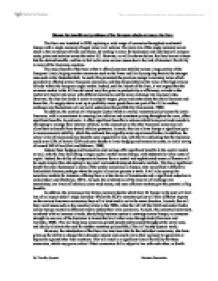 Discuss the benefits and problems of the European single currency, the Euro

Discuss the benefits and problems of the European single currency, the Euro The Euro was launched in 1999, replacing a wide range of currencies throughout continental Europe with a single currency of equal value in all nations. The main aim of the single currency was to assist in the movement of trade and labour, by making it easier for businesses and individuals to compare costs, prices and salaries across the entire EU. However, as will be shown below, the Euro has not always had the desired benefits, and has in fact led to some serious issues due to the lack of structural flexibility in many of the Eurozone countries. The major benefit of the Euro is that it offered common stability across a large portion of the European Union, helping weaker currencies such as the Franc and Lira by coupling them to the stronger ones such as the DeutscheMark. As such, this prevented the previous swings in currency value which periodically affected several European currencies, and thus helped stabilise the value of the high volume of trade within the European single market. Indeed, until the launch of the Euro, it was argued that the common market in the EU has delivered very few gains in productivity or efficiency, as trade in the market still had to take place with different currencies and the same exchange rate exposure risks. However, the Euro has made it easier to compare wages, prices and costs across the entire Eurozone and know that, if a supply chain is set up to profitably move goods from one part of the EU to another, exchange rate fluctuations will not act to undermine this profitability (Economist, 1998). ...read more.

As such, any region that experiences a decline will likely end up having to wait for the business cycle to adjust in order to recover. Indeed, regions such as southern Italy and eastern Germany have not fully recovered from their economic slumps in spite of the arrival of the Euro, and now have lost the ability to devalue against their potential export markets. A final drawback for the Euro is that the natural barriers to flexibility discussed above are further exacerbated by a significant level of rigidity and job protection in the EU labour laws (Grenier and Tran, 1997). Whilst this is not a drawback to the Euro itself, it further increases the likelihood of some regional and national economies overheating whilst others go into recession. In conclusion, whilst the Euro has many potential benefits, the lack of flexibility and coherent structural reforms in the Eurozone have led to many of these benefits not being realised, and has served to exacerbate the drawbacks in some areas. In particular, the Euro has failed to drive structural reform in many nations, and the loss of economic flexibility and rigid labour laws make it difficult for the Eurozone economies to attract the labour and capital necessary to maintain economic stability. Explain what effects might the present rise in the value of the Euro relative to other currencies such as Sterling and the US Dollar have on Eurozone members and their non-Euro trading partners A variation in the exchange rate of a country is most strongly connected to the strength of its imports and exports. For example, if one Euro goes from being worth one dollar to being worth two dollars, then 100 Euro worth of exports from a Eurozone country will now cost $200 in the US, instead of $100. ...read more.

OCED Observer (2004a) presents predictions for the Italian economic, which argue that the growth in the level of exports and investment activity will tend to rise due to the strength of the Euro. This is because Italy has been forced to make several competition reforms to key sectors of its economy, which has helped to make Italy more competitive and innovative relative to its Eurozone partners. This additional competitiveness is now coming to the fore, whilst other nations struggle. In contrast, in another article, OECD Observer (2004b) points out that Ireland's strong growth in previous years has led to excess demand, which has begun pushing up inflation rates. As such, the Irish economy is more vulnerable to the strength of the Euro, as it has not focused on driving efficiency and competitiveness during its rapid growth. Indeed, the strong Euro combined with the lack of flexibility in the Irish economy is arguably one of the reasons why Ireland has gone from being the 'Celtic Tiger', to arguably being included in Smith's (2008) underperforming 'PIGS'. In conclusion, the unique nature of the Euro, as a single currency operating across different national economies with different national legislation, means that the impact of a strong exchange rate is somewhat different than the impact on other countries. Whilst the Eurozone is experiencing the usual loss of competitiveness of its exports, and increasing competitiveness of imports, the diverse nature of the national economies is helping to mitigate this in some areas. In addition, the strength of the Euro has assisted structural reforms in countries such as Italy, whilst exposing structural weakness in nations such as Ireland, thus having a dynamic impact on the distribution of wealth and competitiveness inside the Eurozone. ...read more.