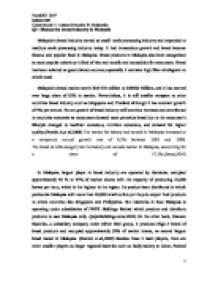 Discuss the bread industry in Malaysia - growth, revenue and pricing.

Q1- Discuss the bread industry in Malaysia Malaysia's bread industry started as small- scale processing industry and expanded to medium scale processing industry today. It had tremendous growth and bread become famous and popular food in Malaysia. Bread products in Malaysia also been categorized as most popular substitute's food of rice and noodle and necessities for consumers. Bread has been selected as good dietary sources; especially it contains high fibre wholegrain or whole meal. Malaysia's bread market worth RM 470 million to RM500 Million, and it has control over large share of 62% in market. Nevertheless, it is still smaller compare to other countries bread industry such as Singapore and Thailand although it has constant growth of 4% per annum. Future growth of bread industry will continue increase and contributed to countries economic as consumers demand more premium bread due to the consumer's lifestyle changed to healthier conscious, nutrition conscious, and demand for higher quality.(Nordin.A,et al,2008) The market for bakery and cereals in Malaysia increased at a compound annual growth rate of 8.5% between 2003 and 2008. The bread & rolls category led the bakery and cereals market in Malaysia, accounting for a share of 57.2%.(Janes,2010) In Malaysia, largest player in bread industry are operated by Gardenia, occupied approximately 40 % to 45% of market shares with the capacity of producing 32,000 loaves per hour, which is the highest in the region. Its product been distributed in whole peninsular Malaysia with more than 20,000 retail outlets yet they do export their products to others countries like Singapore and Philippines. But Gardenia in East Malaysia is operating under subsidiaries of JWPK Holdings Berhad which produce and distribute products to east Malaysia only. (jwpkHolidings.com,2010) On the other hand, Stanson Bakeries, a subsidiary company under Silver Bird group, it produces High-5 brand of bread products and occupied approximately 30% of market shares, as second largest bread maker in Malaysia. ...read more.

If the paste's price is high, it may result lesser demand for white bread. Conclusion: Upward shift in bread demand curve from D1 to D3 when the price of complementary good decreased. e) Expected prices Customer will expect the price of the product increase in future and the demand for now will increase eventually or Vice versa. For example demands of bread, if the future price of bread tend to increase, consumer will buy more and increase in current demand. ( Farnham.P.2005) In economy view, when the price of input increased, the price of final products will increase as well. Wheat flour as main ingredient to produce white bread, so when price of wheat flour increased which increased from RM1.80 to RM2.70 per kilo, eventually price of bread increased by 20 to 30 sen per loaf.(National Consumer Complaints Centre,2009) According to our Malaysia Prime Minister, Dato Sri Najib Tun Razak, he mentioned government allocated subsidies to necessities such as sugar, bread and wheat flour in Malaysia due to the impact of global economic crisis and global food crisis. (Prime Minister Office, 2009) But government only subsidized along 9 months for bread industry, and officially removed subsidies for white bread at 1st of January 2010. (Harum.H, 2010) Wheat flour price increased at 2007, consumers' expected price of bread is higher therefore current demand increased and resulted Bread manufacturers manufactured at RM 4256,972,000 in 2007 and demand decreased in 2008, RM 421,231,000. Another example to verify this determinant is when the government provides subsidy to bread industry at March 2009, expected price of consumer towards tend to be lower price, and therefore, bread industry manufactured at RM36, 782,000 in March 2009 and RM 38,252,000 in April 2009. And when government decided to remove subsidy for bread during January 2010, current demand of bread from consumers increased tremendously from RM41, 036,000 at 2009 December to RM 45,676,000 at 2010 January. ...read more.

By inducing brand loyalty, it actually helps companies to generate higher sales volume where customers repeatedly purchase the same brand. It also enabling companies to have premium pricing ability, when customer are loyal to the brand, therefore customers are less sensitive to the prices changes, attach to the benefits given by sellers and eventually retain customers easily. Besides giving benefits, advertisements insist in re -calling customer by showing them advertisement frequently and create awareness. Advertisement eventually reinforces and stimulates their purchase intention and continuing purchasing the products in the future.( Giddens.N, 2002) With the integration of implementing customer relationship management System, it actually helps companies to identify their consumer behavior, in terms of their purchasing behavior through the information stored in the system. This can help in increasing sales revenue, increase customer satisfaction, and reduced churn rate for the particular brand. (Laudon.K & Laudon.P,2006) For example free voucher during customer's birthday. For example, in Malaysia, King's confectionery, they introduced membership to their customers with King's privileges card. It has no direct in reducing prices of their products, but there are many benefits reward to their customers, for example customers with membership are entitled to get instant 50% discount voucher, free cake and cash voucher, and other discount on their items.(King's ,2010) Customers tend to be advantages taker, therefore, when there is price reduction on their products that they consumed, customers eventually back to the bakery and re-purchase their product as well as creating customer brand loyalty. But for bread makers like Gardenia, and High 5 white bread, there is no club membership been introduced to their customer. Vice Versa, In United States, average number of company loses its customers in every five years, and making losses. This is due to companies in USA in failing maintaining their customers, and didn't create brand loyalty on their customers. (Giddens.N,2002) so from this situation, inducing brand loyalty is very important pricing strategy for bread industry in Malaysia. ...read more.