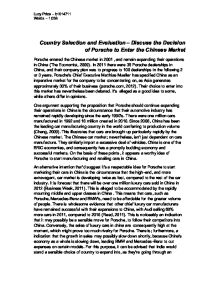 Discuss the Decision of Porsche to Enter the Chinese Market

Country Selection and Evaluation - Discuss the Decision of Porsche to Enter the Chinese Market Porsche entered the Chinese market in 2001, and remain expanding their operations in China (The Economist, 2009). In 2011 there were 35 Porsche dealerships in China, and their company plan was to progress to 100 dealerships in the following 2 or 3 years. Porsche's Chief Executive Matthias Mueller has specified China as an imperative market for the company to be concentrating on, as Asia generates approximately 30% of their business (porsche.com, 2012). Their choice to enter into this market has nevertheless been debated. It's alleged as a good idea to some, while others differ in opinions. One argument supporting the proposition that Porsche should continue expanding their operations in China is the circumstance that their automotive industry has remained rapidly developing since the early 1990's. There were one million cars manufactured in 1992 and 18 million created in 2010. Since 2008, China has been the leading car manufacturing country in the world conferring to production volume (Chang, 2009). ...read more.

This is noticeably an indication that it may possibly be a sensible move for Porsche, to follow their competitors into China. Conversely, the sales of luxury cars in china are consequently high at the moment, which might prove too much rivalry for Porsche. There is; furthermore, a indication that the growth in sales may possibly slow down shortly, because China's economy as a whole is slowing down, leading BMW and Mercedes-Benz to cut expenses on certain models. For this purpose, it can be advised that India would stand a sensible choice of country to expand into, as they're going through an identical sort of economic growth that China has experienced, but still have adequate amounts of resources for the growth to remain for a number of years further than in China. This narrates to the proposition that it could be a bad idea to begin trading in China, since their development is going to slow in approaching years, compared to other evolving economies. China has remained a hotspot for foreign investments over recent years, owed to dynamics such as low wages and additional resources; however, this inevitably growth will start to slow soon as resources and land are used up. ...read more.

This includes very restrictive approval processes for any company moving into China, and an effort to try and shift away from plans to draw foreign capital to the car industry (Shirouzu, 2012). The datum is however that these cars are tremendously popular, and so the likelihood that the regulation will change is low, considering that government car purchases make up an extremely small part of the colossal market. Therefore the rule aforementioned, may not pose a huge threat to Porsche if they were to expand into China, it would be something to deliberate as it's moderately likely that more laws and regulations will be made in the future in attempt to make it additional more difficult for foreign investors in the car market. Inclusively, it appears that while a transfer to china would be gratifying in the short run, as the market provides an opportunity to cut into China's very lucrative economy, nevertheless while thinking long term, strategic decisions such as another country transfer, to the BRIC economies such as India, could stand more a suitable location for Porsche to expand to, due to the considerable higher level of resources and therefore developed potential. ...read more.