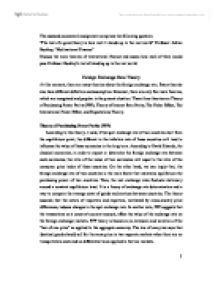 Discuss the main theories of international finance and assess how each of them would pass Professor Buckley's test of standing up in the real world.

The assessed coursework assignment comprises the following question: "The test of a good theory is how well it stands up in the real world" Professor Adrian Buckley, "Multinational Finance" Discuss the main theories of international finance and assess how each of them would pass Professor Buckley's test of standing up in the real world. Foreign Exchange Rate Theory At this moment, there are many theories about the foreign exchange rate. Every theories also have different definition and assumption. However, there are only five main theories, which are recognised and popular in the present situation. These three theories are Theory of Purchasing Power Parity (PPP), Theory of Interest Rate Parity, The Fisher Effect, The International Fisher Effect, and Expectations Theory. Theory of Purchasing Power Parity (PPP) According to this theory, it said, if the spot exchange rate of two countries start from the equilibrium point, the different in the inflation rate of these countries will tend to influence the value of these currencies in the long term. According to David Ricardo, the classical economist, in order to expect or determine the foreign exchange rate between each currencies, the ratio of the value of two currencies will equal to the ratio of the consumer price index of these countries. On the other hand, we can imply that, the foreign exchange rate of two countries is the main factor that maintains equilibrium the purchasing power of two countries. Then, the real exchange rates fluctuate stationary around a constant equilibrium level. It is a theory of exchange rate determination and a way to compare the average costs of goods and services between countries. The theory assumes that the action of importers and exporters, motivated by cross-country price differences, induces changes in the spot exchange rate. In another vein, PPP suggests that the transactions on a country's current account, affect the value of the exchange rate on the foreign exchange markets. ...read more.

This situation is called, Interest Rate Arbitrage. So, if there are any different in the interest rate of two countries, the capitals will always flow out to the country that has higher interest rate. Consequently, the demand for that currency will increase automatically. The international capital transfer might be the cause of risk in the foreign exchange rate. For example, bond in the UK has rate of return or interest rate of 9 percent while bond in Germany has rate of return of 6.5 percent. So the investors or speculators who invest in Germany's bond will change move their capital to invest in UK's bond instead of Germany, which has higher rate of return of 2.5 percent. In this kind of investment, the investors have to change their capital from EUR to GBP and after they get their returns, they have to change GBP back to EUR again. This process is very risky because in the first step that the investors sell EUR and buy GBP, the value of EUR will decrease when compare to GBP due to the excess supply. If the value of EUR has fall to the level that lower that the returns they gain from the Interest Rate Arbitrage, this investment will be unprofitable and unsuccessful. However, there is the way that can reduce this risk. The investors can solve this problem by using swap contract. Using swap contract is to sell their GBP in advance while they are changing their EUR to GBP. This process is called Covered Interest Arbitrage and the investors who speculate from this process are called Arbitrageur. From the concept of Covered Interest Arbitrage, we will get the equilibrium relationship between foreign exchange rate and interest rate, which is illustrated below. Assume that ef = forward exchange rate ec = spot exchange rate r * = foreign interest rate r = domestic interest rate The equilibrium relationship between foreign exchange rate and interest rate is ef = ec (1+r*) ...read more.

For example, assume that GBP has discount forward rate of 4 percent when compare to the others. Then, in one year, the value of GBP should depreciate 4 percent, according to this theory. The relationship between forward rate and future spot rate is based on the assumption that there is an efficient international money market. This assumption means that all information in the market will be reflected by both spot rate and forward rate. If so, the spot and forward rate in this market will reflect the equilibrium point between demand and supply correctly. Actually, the investors cannot predict the exchange rate correctly all the time. On the other hand, it is very difficult to gain certain profit from the prediction of future spot rate. Because, as I illustrated above, in the efficient market, the forward exchange rate will reflect the common information, which is used to predict the future spot rate. Sometime the future spot rate might be different from the market's expectation, which is shown in forward rate. This situation always occur because no one certainly knows that spot rate in the future will be different from present forward rate or not. So we can imply that the present forward rate is the unbiased estimator of the future spot rate. In conclusion, there are three main factors, which are used to predict the future exchange rate in freely floating exchange rate system. 1. Expected change in spot rate 2. Difference in expected inflation and interest rate 3. Forward exchange premium or discount rate These three factors are directly related with each other. Due to the assumption that the international money markets are efficient, every factors will change rapidly if there are any changes in any other factors. However, the expected inflation rate is the most important variable that will lead to the change in other factors. So the exchange rate predictors always try to analyse the factors that can lead to the change in inflation rate, such as money supply, business cycle, productivity, and capacity utilisation. 1 ...read more.