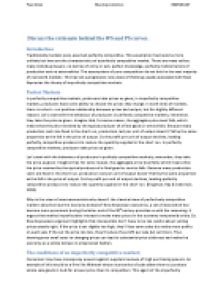 Discuss the rationale behind the WS and PS curves

WS & PS Curve Source; Oxford Journals If the WS curve shifts downwards: workers will bargain for a lower wage ceteris paribus and therefore the wage-setting curve shifts down, if PS curve shifts downwards, the mark up rises, if PS curve Shifts downwards; the tax wedge rises, reducing the real wage for workers and if WS curve shifts downwards and lowering bargaining power of unions. Theoretical Work Interpreting the WS & PS curve; WS: wages are determined by expected level of prices, factoring in unemployment and market conditions. PS: Prices are determined by wages & the mark up price rate. To find the structural rate of unemployment is found by setting P=Pe. This gives us the expected rate of unemployment in the long run. This is illustrated diagrammatically in figure below. In the short run it can?t always be assumed that P= P e. If there are any shocks for example unexpected inflation occurs, this change to P?Pe The short run is now denoted as; We now have two WS-PS equations, by subtracting the Long Run equation from the Short Run equation we are getting a relation between deviations from the equilibrium. This is the basis leading to the underpinning of the Philips Curve theory. When looking at the rational of the WS PS Curve it appears that capital formation affects the equilibrium unemployment rate. Two notions of equilibrium unemployment can be distinguished. The short-run NAIRU, when capital stock is taken as given, the long-run NAIRU when capital stock is endogenous. ...read more.

There is a new medium-run equilibrium at Z with higher employment and with inï¬ation at the original rate: the supply-side shift lowers the ERU. The assumption that the P S-curve is ï¬at means that the real wage in the new equilibrium is the same as it was originally. This is a rather striking result; higher union bargaining power means a higher ERU but unchanged real wage means unions are able to raise the wage above the equilibrium level. Thus this minimum wage causes the number of job seekers to be larger than the number of workers firms are willing to hire. Collective bargaining causes the unemployment rate to be higher than it otherwise would be. The conclusion that an intermediate extent of centralisation (wage setting at the industry level) may produce worse macroeconomic outcomes than both very high and very low degrees of centralisation rests on the assumption that a substantial amount of competitive pressures for wage restraint is eliminated if domestic producers bargain together. The increase in market power will, however, be less; the more important is international competition, since foreign competitors are not encompassed by domestic wage increases. The hump will be lower the more international competition there is a flatter relationship between centralization & unemployment. Indeed, if domestic and foreign products are perfect substitutes, it would be impossible for domestic firms within a given sector in a small open economy to raise their relative price even if they co-operate In this case, the relationship between the extent of centralisation and the aggregate real wage degenerates into a horizontal line. ...read more.