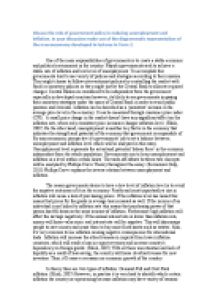 Discuss the role of government policy in reducing unemployment and inflation

﻿Discuss the role of government policy in reducing unemployment and inflation. In your discussion make use of the diagrammatic representation of the macroeconomy developed in lectures in Term 2. One of the main responsibilities of governments is to create a stable economic and political environment in the country. Majorly governments seek to achieve a stable rate of inflation and low level of unemployment. To accomplish this governments tend to use variety of policies and strategies according to their mission. They might choose to follow interventionist policies by controlling the market with fiscal or monetary policies or they might just let the Central Bank to allocate required changes. Central Banks are considered to be independent from the government especially in developed countries however, its likely to see governments imposing their monetary strategies under the name of Central Bank in order to avoid public pressure and criticism. Inflation can be described as a ?persistent? increase in the average price level in the economy. It can be measured through consumer price index (CPI). A small price change in the market doesn?t have any significant affect on the inflation rate, where only consistent price increases changes inflation level. (Blink, 2007) On the other hand, unemployment is another key factor in the economy that indicates the strength and potential of the economy that government is responsible of. ...read more.

Commitment of society doesn?t allow government to impose fiscal policies, so monetary policies are considered to be a better solution to control aggregate demand. Anyway, fiscal policies won?t be effective in short-run since government can?t cut the spending in one day. Another inflation type Cost-Push inflation might cause as a result of increase on the cost of factors of production. This might be based on wage-push inflation, change on the cost of raw materials, increased rents etc. This increase on costs shifts the supply curve from SRAS1-SRAS2 as demonstrated in Fig.2 below. Since the cost of doing business and production has increased suppliers lower their production level in order to balance their costs. However this change in supply level raises the average price to P2 from P1 that represents an inflationary situation. Fig.2 To reduce cost-push inflation government should use market-based supply-side policies such as creating a more competitive market. This will increase the pressure on prices and lowers costs. Also reducing corporate taxes and applying subsidies will help firms to cover its costs. Deflationary demand-side policies might decrease the price as well however it will result a loss in national output, thus supply-side policies are more suitable for cost-push inflation. (Tutor2u, 2013) Another key factor that governments are responsible of is unemployment level in the market. ...read more.

Assuming that they will earn ?higher? wages people will take new jobs, however because of higher inflation rate their ?real wages? won?t change, it will only make a difference in nominal wages. This can be explained as money illusion. Due to this, some employees can quit jobs in short-run (SRPC1-SRPC2) because of unsatisfactory wage conditions. So unemployment level will return back to its initial level, however this time with higher inflation rate (C). Fig.3 Any other demand policies will just repeat this cycle. In order to avoid this situation, governments should apply supply-side policies that would shift LRPC backwards (LRPC1-LRPC2, Fig.4) so that unemployment level will reduce however with same level of inflation. (Fig.4). Fig.4 To conclude, governments main macroeconomic objective and responsibility is to keep unemployment and inflation level ?within certain limits? by applying appropriate policies mentioned in each case. It?s hard to classify every real life situation with economic theories, so mixture of solutions should be used. REFERENCE LIST * Archibald, G.C., 1969. The American Economic Review. The Phillips Curve and Distribution of Income. [online] Available at: http://userwww.service.emory.edu/~skrause/E511/Archibald-1969.pdf. Accessed on [02.04.2013] * Blink, J., Dorton, I., 2007, IB Diploma Programme-Economics HL-Course Companion, Oxford University Press. * Economics.Help, 2013. Trade-off between unemployment and inflation. [online] Available at: http://www.economicshelp.org/blog/571/unemployment/trade-off-between-unemployment-and-inflation. Accessed on [01.04.2013] * Triple a Learning, 2013. Macroeconomics-Full Employment Level of Income. [online] Available at: https://courses.pamojaeducation.com/shared/Courses%20(DO%20NOT%20DELETE)/Group%203%20-%20Individuals%20and%20Societies/Economics/Economics%20M2014%20SL/eText/macroeconomics_11/page_52.htm. Accessed on [01.04.2013] * Tutor2u, 2013. Supply-side economic Policies. [online] Available at: http://www.tutor2u.net/economics/revision-notes/as-macro-supply-side-policies.html. Accessed on [01.04.2013] ...read more.