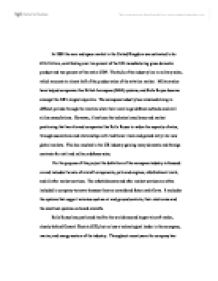 In 1998 the aero and space market in the United Kingdom was estimated to be �21.6 billion, contributing over ten percent of the UK manufacturing gross domestic product and two percent of the entire GDP. The bulk of the industry lies in military sales, which amounts to almost half of the product sales of the aviation market. Military sales have helped companies like British Aerospace (BAE) systems, and Rolls Royce become amongst the UK's largest exporters. The aerospace industry has remained strong in difficult periods through the nineties when there were large defence cutbacks and civil airline cancellations. However, it has been the technical excellence and market positioning that has allowed companies like Rolls Royce to widen the capacity of sales, through associations and relationships with traditional rivals and gained entry into new global markets. This has resulted in the UK industry gaining many domestic and foreign contracts for civil and military defence sales. For the purpose of this project the definition of the aerospace industry is focused on and includes the sale of aircraft components, parts and engines, refurbishment work, and all after market services. The refurbishments and after market services are often included in company turnover because they are considered future cash flows. It excludes the systems that support avionics such as air and ground controls, their electronics and the electrical systems on board aircrafts. Rolls Royce has positioned itself as the worlds second largest aircraft maker, closely behind General Electric (GE), but no less a technological leader in the aerospace, marine, and energy sectors of the industry. Throughout recent years the company has built a broader base growing through acquisitions and the expansion of its ample product range. Success has been attributed to the ability to accurately recognize the requirements of world markets and provide outstanding customer and product life support. The Rolls Royce aerospace business makes gas turbine engines for both military and commercial aircraft worldwide. ...read more.

It can then be viewed as the opportunity cost of capital. Either using the CAPM, or in this case using the dividend valuation model can calculate it. This cost of equity is calculated as the dividend yield for the next year plus the percentage of annual dividend growth. Next years dividend yield is the last dividend that was paid multiplied by one plus the growth rate, divided by the current market value of the shares. Rolls Royce who paid a dividend of 8.00p per ordinary share paid a total of �126 million in dividends for 2000. The company has adopted a growth model with a 10% growth factor and whose shares are traded on the market at 184.25p for a total of �2932 million. Thus, it has an estimated cost of equity of 14.72% per annum. The method used to estimate the cost of issuing preference shares is identical to that of irredeemable loans. However, Rolls Royce does has not issued preference shares and therefore this does not factor into the cost of equity. Cost of Debt Debt capital can be defined as a loan that is made to a company that will be repaid at a future date. This differs from share capital in two major ways. The issuers of debt do not own part of the company, and the payments they receive in the form of interest are a fixed annual rate whereas dividend are not contractually fixed. These payments are placed above equity in terms of payment. With a fixed rate of return, interest payments, a fixed time of payment, and preferential treatment, debt serves as a much less risky form of capital for a company. Short-term borrowings or amounts falling due within one year consist of overdrafts, bank loans, other loans, and obligations under finance leases. The total short-term borrowings undertaken by the company amounted to �272 million for 2000, down from �408 in 1999. ...read more.

Movements in exchange rates of foreign currencies effect both foreign transactions and the conversion of profit and loss accounts. The most significant exposure is that of the US dollar to Sterling. US income accounts for 42 percent of its UK turnover. The company covers its exposure through the continual hedging of standard foreign exchange contracts and currency options against their dollar income. In fact, risk managers tend to use covered option writing as a means of protection. "We do believe that buying and writing of options can complement our hedging policy... We will in no event ever write options if there is no requirement to have the underlying there in the first place... that is we will not write naked options."(Mark Morris, financial risk manager, "No Fear of Options Here," Corporate Finance, July 1994, p. 44) A point of interest lies where Rolls Royce sells sterling puts on the dollars its receives as income. To sell a put when it already has a forward position seems to be somewhat equal to a call option. The company manages its interest rate risk by using interest rate swaps to change fixed rate borrowings into floating rate borrowings in order to match the rates of short-term bank deposits. Commodity risk includes the company's sensitivity to changes in the price of jet fuel. In order to best hedge against changes in the price of jet fuel it has entered into jet fuel swaps. The following report was written with the intent of displaying the financial position of United Kingdom Rolls Royce Plc. An analysis is given using company reported data spanning from January 1996 to December 31, 2000, and statistical data up to the week of December 4, 2001. Market values are based on share price taken November .......The report uses information and has derived calculations from the annual report of 2000. These calculations include that of the dividend policy and growth rate, cost of capital, both equity and debt, and their weighted averages. These calculations, although limited in depth, are fundamental in analysing the company's current financial capital structure. ...read more.