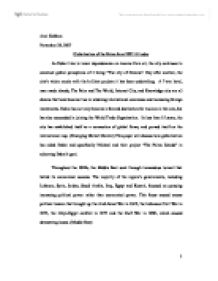 Amir Kabbara November 28, 2007 Globalization of the Palms from 2002 till today As Dubai tries to lower dependencies on income from oil, the city continues to construct global perceptions of it being "The city of Dreams". Day after another, the city's vision excels with the brilliant projects it has been undertaking. A 7-star hotel, man made islands, The Palm and The World, Internet City, and Knowledge city are all dreams that have become true in widening international awareness and increasing foreign investments. Dubai has not only become a favored destination for tourism in the area, but has also succeeded in joining the World Trade Organization. In less than 15 years, the city has established itself as a connection of global flows, and proved itself on the international map. (Emerging Market Monitor) This paper will discuss how globalization has aided Dubai and specifically Nakheel and their project "The Palms Islands" in achieving Dubai's goal. Throughout the 1900s, the Middle East went through tremendous turmoil that halted its economical success. The majority of the region's governments, including Lebanon, Syria, Jordan, Saudi Arabia, Iraq, Egypt and Kuwait, focused on pursuing increasing political power rather than economical power. This focus caused excess political tension that brought up the Arab-Israel War in 1943, the Lebanese Civil War in 1975, the Libya-Egypt conflict in 1977 and the Gulf War in 1990, which caused devastating losses. ...read more.

After this feasibility study had been conducted, the results showed that Nakheel had to globalize in order for Dubai to become the World's top tourist destination. (Construction) There are two main reasons why Nakheel has chosen to globalize in order to achieve Dubai's goal. The first reason it had to globalize is because it needed the expertise and the aid to create such a project. The second reason is that it had to attract new markets and market Dubai to the world and potential tourists. Globalizing 1: Looking for Expertise and Top Quality Dubai and the UAE are very small in size and in population and in company range. They have great minds however they don't have enough of them to create such a project. Dubai had to go global and contract with, partner with, merge with and acquire foreign companies that would aid in making Dubai the world's most attractive, unique, innovative, diversified and pioneering destination. In order to look at how and where Nakheel has globalized to increase their expertise we will look at Nakheel's two main phases of creating the project, The Palm Islands. Nakheel had to create the island from scratch and this was done in two main phases which are 1) to create the land with dredging process and 2) to create the bridges, roads, buildings, beaches, resorts, and hotels. ...read more.

The residential part of the Palms was targeted towards both foreigners and locals. Some apartments were created by Dubai owned companies with Arabic style houses while others were created by foreign companies with international styles to suit all sorts of people. Nakheel wanted to give every foreigner a perfect world. Nakheel has sub-contracted with hotels providing mid-century styles, artistic styles and 'modern' styles having one of the biggest water parks. Nakheel made sure that there is something for everyone on the Palms. There strategy was effective. Nakheel sold all the residential apartments in only a couple of hours after the opening. Some of the Palms property buyers include celebrities such as David Beckham, Joe Cole, Ashley Cole, Michael Owen, Maria Sharapova, Bob Geldof, Brad Pitt and Angelina, Rukh Khan, Richard Bransun, Vijey Singh and Diana Ross. The Palms became one of the ten Wonders of the World bringing in global tourists to Dubai. (Dubai Super Star City) As shown in Figure 2, at least one person from each continent has visited or owns property in the Palms. In the past decade or so, globalization has had its influences on the new hub of the east and west, Dubai. Dubai has evidently proved itself being an emerging global city and one of the world's major tourist hubs. This is due to major attractions such as the palms, which was created by Nakheel. Nakheel was a critical player in the development of this international city. Although all the credit goes to Nakheel, we can never forget all the global companies that aid in Nakheel's success. ...read more.