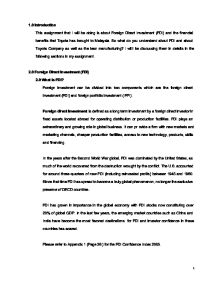 1.0 Introduction This assignment that I will be doing is about Foreign Direct Investment (FDI) and the financial benefits that Toyota has brought to Malaysia. So what do you understand about FDI and about Toyota Company as well as the lean manufacturing? I will be discussing them in details in the following sections in my assignment. 2.0 Foreign Direct Investment (FDI) 2.0 What is FDI? Foreign investment can be divided into two components which are the foreign direct investment (FDI) and foreign portfolio investment (FPI). Foreign direct investment is defined as a long term investment by a foreign direct investor in fixed assets located abroad for operating distribution or production facilities. FDI plays an extraordinary and growing role in global business. It can provide a firm with new markets and marketing channels, cheaper production facilities, access to new technology, products, skills and financing. In the years after the Second World War global, FDI was dominated by the United States, as much of the world recovered from the destruction wrought by the conflict. The U.S. accounted for around three-quarters of new FDI (including reinvested profits) between 1945 and 1960. Since that time FDI has spread to become a truly global phenomenon, no longer the exclusive preserve of OECD countries. FDI has grown in importance in the global economy with FDI stocks now constituting over 20% of global GDP. In the last few years, the emerging market countries such as China and India have become the most favored destinations for FDI and investor confidence in these countries has soared. Please refer to Appendix 1 (Page 26) for the FDI Confidence Index 2005. Foreign portfolio investment is the purchase of stocks and bonds to obtain a return on the funds invested. Although portfolio investors are not directly concerned with the control of a firm, they invest immense amounts in stocks and bonds from other countries too. ...read more.

Foreign management skills acquired through FDI also produce important benefits for the host country because foreign trainers trained in the latest management techniques can skills that can often help to improve the efficiency of operations in the host country. 2.5.1.2 Employment FDI also brings jobs to a host country which reduces unemployment level. The benefits of FDI reach beyond employment. Firstly, salaries paid by multinational corporations are usually higher than those paid by domestic firms. Besides, the creation of jobs translates also into the training and development of a skilled workforce. For an example, the government of South Africa has been encouraging FDI in part to help reduce high unemployment which stands at around 35 percent. 2.5.1.3 Balance of payment FDI will also bring an effect to the host country's balance of payment. Import substitution, export earnings and subsidized imports of technology and management all assist the host nation on the trade account side of balance of payment. Not only a few production facilities substantially decrease the need to import the type of products manufactured, but it may also start earning export revenue. 2.5.2 The costs of FDI to host countries 2.5.2.1 Adverse effects of balance of payments Host country benefits from the initial capital inflow but it is a one-time-only effect because foreign subsidiaries will send their earnings to their parent company and this is an outflow of earnings of host country. Such outflows show up as a debit on the capital account. Some governments have responded to such outflow by restricting the amount of earnings that can be repatriated to their home country. 2.5.2.2 Threat to national sovereignty and autonomy Many host government worry that FDI is accompanied by some loss of economic independence too. The main concern is that the foreign parent which has no real commitment to host country will make decisions that can affect the host country's economy, while the host country's government has no real control on it too. ...read more.

These are the results of the commitment, passion and the pursuit of excellence. For a manufacturer to become lean and follow Toyota's footstep is possible but not easy. Fact 1 Toyota plant in Kentucky is Toyota's largest plant in the world outside Japan. It has a total throughput time of just 22 hours. In other words, they operate on two 10-hour shifts per day. The coils of steel received first thing on Monday morning will then roll off the assembly line as finished automobiles, sometime at the early of Tuesday morning. Fact 2 In 2004, the Toyota Motor Company had operating income of 9%. This was 45% higher than its nearest U.S. competitors. Fact 3 Toyota U.S. market share has grown faster than any other major competitors. Since 1990 to 2005, Toyota's market share has a positive changed as much as 61%. Fact 4 In 2004, Toyota has less than a dozen of re-calls. Their US competitors have over 100 re-call every year. Fact 5 In the past 20 years, Toyota has created over 50,000 jobs in the United States, while competitors are forced to lay workers off as more and more plants are closed down. 5.0 Conclusion Foreign direct investment overall has greater benefits that problems to the host countries. One of the advantages is that it is able to help in the economy growth of the host country. Several methods of foreign direct investment such as licensing and franchising are more common types of methods. For an example, Mc Donald's is a very successful franchising company. Lean manufacturing is a very popular manufacturing method in these days. Toyota is one of the very successful companies that had successfully adopted lean manufacturing in Toyota production process. This has lead to numerous benefits to Toyota Company itself as well as to the host countries. Finally, I would like to say that Foreign Direct Investment is very important in these days. Without FDI, there will not be a fast growth of economies of countries. It helps to create more job opportunity which reduces unemployment level, and allowed resource transfer. ...read more.

This student written piece of work is one of many that can be found in our University Degree Economic Systems section.