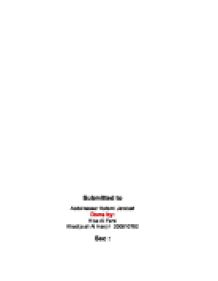 Econometrics Case Study. The main objective of this project is to apply the econometrics methods that we have obtained through out the course to create a reliable and useful model for capturing the potential relationship between variables of interest.

Submitted to Abdulnasser Hatemi Jarabad Done by: Hiba Al Farsi Khadija ali Al Hanjiri 200810792 Sec : Content Executive summary In this report we are going to examine the relationship between the variable to estimate a good econometrics model .An econometric model is only as good as the underlying desirable assumptions. If these assumption are not fulfilled the model is useless. Using Diagnostic tests would help us in testing wither the assumption is fulfilled or not. And these are: No Misspecification, No Autocorrelation, Homoscedasticity and normality. If any of the assumption is not fulfilled then a potential remedy should be found before the model can be used .Then in each testing we will demonstrate if we create a reliable and useful model for capturing the potential relationship between variables of interest . Introduction Econometrics is fundamental for economic measurements. However, it is important extends far beyond the discipline of economics. Econometrics is a set of research tools also employed in the business discipline of accounting, finance, marketing and managements. In Addition, econometrics plays a special role in the training of economist .As a Finance student we are assigned by Dr. Abdulnasser Hatemi Jarabad to learn on how to be an economist in applying econometrics model that we have acquired from the course. In this report we collect data from Dubai financial market in 2008 by selecting two variables to use; market price index and stock price of one of the listed banks in the market .First dependent variable (y) is market price index and the second independent variable (x) is the stock price of Commercial Bank of Dubai (CBD) .Using Regression analysis is to examine the potential relation of a dependent variable (y) to specified independent variable (x). To simplify things we define dependent variable as (y) and independent variable as (x) because this variable explains the variation in (y). These two have cause and effect relationship. ...read more.