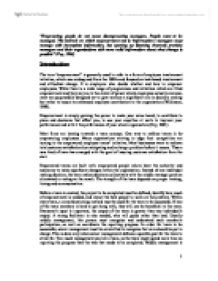 Empowerment is simply gaining the power to make your voice heard, discuss.

"Empowering people do not mean disempowering managers. People want to be managed. The bedrock on which empowerment rest is 'information'; managers must manage with incomplete information, but opening up listening channels provides managers and their organisations with more valid information about what change is possible" (Foy, 1994) Introduction The term "empowerment" is generally used to refer to a form of employee involvement initiative, which was widespread from the 1980s and focused on task-based involvement and attitudinal change. It is employers who decide whether and how to empower employees. While there is a wide range of programmes and initiatives which are titled empowerment and they vary as to the extent of power which employees actually exercise, most are purposefully designed not to give workers a significant role in decision making but rather to secure an enhanced employee contribution to the organisation (Wilkinson, 1998). Empowerment is simply gaining the power to make your voice heard, to contribute to plans and decisions that affect you, to use your expertise at work to improve your performance and with it the performance of your whole organisation (Foy, 1994) Most firms are leaning towards a team concept. One way to enforce teams is by empowering employees. Many organisations striving to edge their competition are turning to the empowered employee teams' initiative. Most businesses want to achieve total customer satisfaction by anticipating and solving a problem before it occurs. Thus a new kind of team has emerged with the goal of insuring customer satisfaction from the start. Empowered teams are built with empowered people whom have the authority and autonomy to make significant changes within the organisation. Instead of one individual making decision, the team makes decisions collectively with the middle manager position eliminated or acting as the coach. The strength of the team depends on proper training, timing and communication. Before a team is created, the project to be completed must be defined, identify how much of empowerment is needed, and recruit the best people to work on the problem. ...read more.

The move to customised products with flexible specialisation (Piore and Sabel, 1983) and flatter and leaner structures was seen as the new route to competitive advantage and this meant increasing focus on labour as a resource not just a cost. Rather than trying to control people, they should be given discretion to provide better service and achieve higher standard of work. The argument emphasised the need for faster decisions in a changing marketplace with employees closest to the customer/product best placed to make decisions concerning related issues (Wilkinson, 1998). Classifying empowerment Empowerment is associated with redistribution of power, but in practice empowerment is usually seen as a form of employee involvement, designed by management and intended to generate commitment and enhance workers contributions. With employee involvement, the onus is on employers to give employees the opportunity to be involved. It is individualist rather than collectivist in its orientation, i.e. empowerment is based on individual workers or teams but not on larger groups such as trade unions. It encompasses direct involvement in work practices rather than indirect (Wilkinson, 1998). Financial participation and representative participation were not part of the agenda, rendering it distinct from other forms of employee involvement, employee participation and industrial democracy. Thus a distinction could be made between empowerment initiatives as defined above and initiatives which may empower (the latter including industrial democracy) (Wilkinson, 1998). There is a need to question who is empowering whom and why, as well as examining to whom do the benefits (if any) belong? No doubt the empowerment movement appropriates language from wider political movements - feminism, and the ecology movement where empowerment is seen as a positive force, but a key difference is that these movements are rooted in the oppressed, i.e. helping people to help themselves, whereas the empowerment movement is driven by those in power, i.e. helping managers to manage the organisation (Hennestad, 1998). ...read more.

The right shape for empowerment must of course take into account the needs of customers. A traditional organisational chart usually appears as a pyramid, with executives at the top and customers at the bottom. Empowered and customer responsive organisation have attempted to dispense with this structure, forming instead organisation based on the needs of customers. The feel of an empowered workplace is noticeably different from that of a traditional organisation. The feeling of being excited in one's work is very real. There is an open exchange of ideas and a good dose of constructive conflict. A critical trap to avoid in any empowerment initiative is confusing restructuring and empowerment. Restructuring alone will not empower an organisation. It will only help make empowerment possible by removing some of the barriers to it. To create an empowered organisation, it is also necessary to change attitudes and behaviours, and to provide people with the skills they need to function in the new structure. Structures can only be effective if people working in them have the skills. In a fluid, flat, empowered structure, individuals will be called upon to use skills such as influencing, problem solving, and teamworking. In conclusion, while there has developed a variety of forms of empowerment that share a common basis in being managerially driven and hence within an agenda that allows for largely task-based empowerment, there is a need to recognise that empowerment has different forms and should be analysed in the context of broader organisational practice. The importance of these initiatives depends on how they are translated within the real terrain of the workplace. Empowerment may not in practice dilute overall management control: rather it can reconstitute the nature of such control. This does not mean that empowerment does not benefit employees. Nor while these benefits may be limited should they be dismissed as irrelevant. A pragmatic approach needs to be taken. Some remediation of problems in managing employment relation is certainly better than none. There should be a move to examining the conditions under which empowerment is most effective and how workers commitment can be increased. . ...read more.