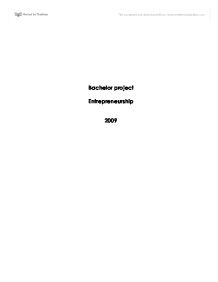 Entrepreneurship, my bachelor project is to analyze the situation of the ethnic female entrepreneurs in Denmark, based on the following questions: - Theoretical demonstration of entrepreneurship in historical context - Analysis of the

Bachelor project Entrepreneurship 2009 "Entrepreneur is one who always searches for change, responds to it, and exploits it is an opportunity." - Peter Drucker 1 Executive summary I spent my internship at Copenhagen Business centre, where I was an intern in a so called "Get started programme for women entrepreneurs" project. This project�s main target group is the women who live in Copenhagen and have another ethnic background then Danish. Through the project I was able to see the different types of entrepreneurs and their dream of opening a business in Copenhagen. Copenhagen Business Centre would like to help all of these women to get a general knowledge about how to develop their ideas into business plans and how to start their business. I choose to write about entrepreneurship, its history, culture and women entrepreneurs and their possibilities in Denmark. This project should help to understand entrepreneurship better and give an overview of the difficulties that the ethnic women came across during starting a business. The word entrepreneur has its origin in the French language. It refers to the organizer of musical or other entertainments. An entrepreneur is one who organizes, manages and assumes the risks of an enterprise. An enterprise visualizes a business, takes bold steps to establish under takings, coordinates the various factors of productions and gives it a start. Entrepreneurs are the owners of the business who contribute the capital and bear the risk of uncertainties in life. Entrepreneur takes decision regarding what to produce, how to produce, where to produce and for whom to produce. He mobilizes other factors of production namely; land, Labour, capital, organization and initiates production process. She is responsible for both the profit and loss. Entrepreneurs have been around since the beginning of time. But the term was first introduced by a French economist by the name of Richard Cantillon in the 18th century. Van Praag (2005) divides entrepreneurship concept into five different groups which are classical approach, neoclassical approach, Schumpeterian, Knightian, and neo-Austrian approach. ...read more.

For increases in income are experienced, the entrepreneurial sector may increase, as more individuals would like to set up a business for themselves, because the economy gives opportunity for them. There is no reason to expect that the upward slope will be as steep as the downward slope. The dispersion of TEA country estimates around the line of best fit in Figure 3 shows, entrepreneurship rates are not just a function of variant in economic development but also of other factors. Entrepreneurship is also a socio-economic symptom. The rapidly expanding entrepreneurship studies indicate that entrepreneurial activity rates may differ across countries for cultural, institutional, economic, and demographic reasons. For instance, motivations, regulations, and rules for starting a business can be different across the world. Geographical precedent can also be witnessed in Figure 3, which shows that countries with similar geographic backgrounds and traditions tend to cluster together. The EU countries are situated close together. Japan's rate of early-stage entrepreneurial activity has been increasing in recent years and is now very similar to the EU-average. Figure 3 8 4. Entrepreneurs in a view of age and gender People between ages 25-34 has the highest prevalence rate for every phase of economic development. Thereafter the prevalence rates decrease as age increases. Figure 4 shows the differences in female and male entrepreneurs for each country in 2008 according to GEM. The ratio of female to male participation differs in each period, reflecting different culture and customs. In many efficiency - driven countries; eastern European countries male TEA rates are higher than female TEA rates. In innovation-driven countries, the amounts of men entrepreneurs are double then the women entrepreneurs. Figure 4 9 5. Entrepreneruship education All of the factor-driven countries men were more efficient when it came to entrepreneurship training then women. If we look at the efficiency-driven countries, the difference between men and women according to receiving entrepreneur training were not significant. 73% of the innovation-driven countries had significantly higher levels of workshops amidst men than women. ...read more.