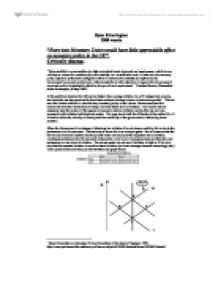 &quot;Entry into Monetary Union would have little appreciable effect on monetary policy in the UK&quot; Critically discuss.

Ryan Etherington 2989 words "Entry into Monetary Union would have little appreciable effect on monetary policy in the UK". Critically discuss. "Price stability is a precondition for high and stable levels of growth and employment, which in turn will help to create the conditions for price stability on a sustainable basis. To that end, the monetary policy objective of the Bank of England will be to deliver price stability (as defined by the Government's economic policy) and, without prejudice to this objective, to support the Government's economic policy, including its objectives for growth and employment." Gordon Brown, Chancellor of the Exchequer, 6 May 1997. In the past three decades the UK has had higher than average inflation for a G7 categorized country, and since the war has perceived to have been underperforming in terms of economic growth.1 The two are often linked with this in mind the key monetary policy of the Labour Government (and the Conservatives before it) has been to keep a low and stable level of inflation. The Conservatives originally used the control of the supply of money to achieve inflation results, this was not very successful with inflation both high and erratic. ...read more.

including its objectives for growth and employment; * if inflation is more than 1 percentage point higher or lower than the target, the Bank will be required to publish an open letter explaining why inflation has deviated from the target and what actions it intends to take to get it back to target.2 This has again strengthened the credibility of the Governments monetary policy of low inflation, if the MPC has low inflation as its only objective its preferences can be written as below. Notice the private sector has the same preferences as before (A&D>B&C), but the MPC has a target which states its only interest is to achieve low inflation (it's preference for low inflation is strictly dominant over choosing high inflation). No matter what the private sector chooses the MPC will always choose low inflation, the private sectors preferences are that expected inflation matches actual inflation and as such will choose Expected inflation to be low. The outcome will now always be A (on previous graph), by giving the Bank of England independence the Government has made its monetary policy more credible and removed the inflation Bias. ...read more.