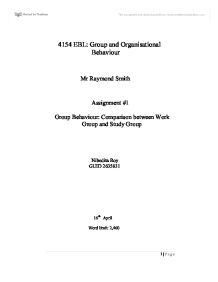 A group can be define as a collection of individuals who have regular contact and frequent interaction, mutual influence, common feeling of camaraderie, and who work together to achieve a common set of goals. People have been living their lives in groups, in the workplace, in families, among friends, in neighbourhoods, and in communities (Lawler, E. J., 2005).

Working in a group effectively is a challenge for the members of the group. One challenge is conflict as there are so many people who have so many opinions (De

Dreu, Harinck, & Van Vianen, 1999; Thomas, 1992; Wall & Callister, 1995). In a group,  members contribute to the group through social inputs and task inputs (Forsyth, 1983), conflict in group is concerned with relationship and task issues as because individual group members has individual personal taste, values, and interpersonal style. Even though these conflict people work in a group and take right decision to reach their goal.

As there are so many groups and in group there is conflict to take a decision, so it is important to understand the group dynamics of diverse groups and their functionality in different aspects. This paper aims to evaluate the study group which is an informal group, where the class mates get together to complete their group study tasks for example, group presentation or group assignment, with the same goal to get higher. On the contrary, this paper will also concentrate on another group, work group which is a formal group. Work group also have similar goal and motivation. They also face problem while taking decision as there are so different types of members with different opinion.  This paper will focus on these two group’s behaviour from the perspective of decision making.

A group consist with two or more individuals, who are interacting and interdependent and work together to achieve similar objectives. There are two types of group, formal and informal group. Formal is a designed group who has specific tasks to accomplish with responsibilities within an organisational structure. In these types of groups the behaviours that one should engage in are usually determined by the organisational structure. In formal groups people has specific tasks to do and they must have a person in charge of the group. Formal groups have particular policies, procedures and outcomes.  On the contrary, informal group is a group which is neither formally structured nor organisationally determined. These types of group are created to meet people’s social needs (Robbins, S. P.; Millett, B.; Cacioppe,R. & Marsh, T. 1998, p. 307).

People join the group because of security, status, self-esteem, affiliation, power and goal achievement. Also a group develop through five stages which are forming, storming, norming, performing and adjourning. So the first step of forming group is forming that means group development. Secondly, group develop by intra group conflict. Thirdly, members of the group try to set up pa close relationships among the members. Fourthly, members perform their best and finally group prepares for its disbandment (Robbins, et.al 1998, p. 307-309).

So, it can be said that group forming is a process through which members of the group try to take a decision exchanging their opinions to achieve their goal and of course group work is affected by members’ behaviour.

Study group is that group where few students study together to complete their study requirements. Though they have to follow the study rules but they are considered as informal group because this type of group does not emerge officially and they are not formally designated as parts of the organisation (Wood. P. J., Wallace, J., Zeffane, R. M., Chapman, P. J., Fromhiltz, M. & Morrison, V. 1994, p. 264). For study group students prefer to build a group by themselves with their familiar persons or with friends (Kelly, P. 2008). In study group there are student with different views, norms, ideas and different personality. This type of group is informal and they build good relationship among them. Study group has to design a pattern to accomplish their task and also there are some instruction provided by the professor or instructor. Study group also follow the five stage model. According to five stages model study group form a group, face conflict to make a leader, divide their tasks and discuss their opinion to get a decision and lastly they present their task. But normally they do not have any leader, so sometimes if the members are not easy going so there can emerge a leadership conflict. As well as they are from different background so they need to be more patience, self efficacy and have ability to except other members of the group to take a decision by avoiding conflict. For example, in a study group it is difficult for all the group members to come to consensus due to different cultural background and experience. And also facing difficulty in taking decision as there is no formal leader selected inthe group which gives rise to dominating behaviour leading to conflict.

Work group is a group where members work in a formal environment with a similar specific purpose. Work group is a formal group as they have to follow the organisational rules and regulations and they are officially designated and formally emerged as the part of the organisation. Regard on decision making they depend on the group leader for example, manager.  Because within these formal work groups, people are assigned positions for example, supervisor or manager (Wood et.al. 2004, p. 263-264).

A work group context can be defined as a situation where group members perceive the presence of encouraging work conditions that enhance their attitudes about the workplace; these can include helping behaviour, group cohesiveness, peer leadership, and cooperation in completing work requirements (Vardi and Weitz, 2004).

Work group also follow the five stage model. According to five stages model work group form a group with employees, they have a leader, who divide their tasks and according to the authority structure, rules and regulations and at the same time with the leader’s direction they has to complete their task to achieve the goal.

For effective group work, students’ competent in both the content and process are most important. On the one hand, content is important as it refers to being able to successfully apply one's content knowledge so that the group can solve a problem or create a group product. On the contrary process, refers to being able to successfully execute skills such as building trust, coordination and conflict resolution. These two things are considered important for decision making in study group (Hanham, J. 2008).

Cognitive conflict is important for high quality decisions; even it appears to be an impediment to consensus and affective acceptance. According to some researcher, cognitive conflict is multidimensional. One dimension of conflict enhances decision quality. On the other hand another dimension attenuates consensus and affective acceptance (Pinkley, 1990; Pondy, 1969; Rahim, 1983).

Goal conflict is an interpersonal relationship which involve in divergent preferences regarding at least one of the decision outcomes. In extremely unlikely circumstances it may involve divergent preferences over all of the decision outcomes, constituting a zero-sum game. However, goal conflict generally takes some mixed motive form in which decision makers' preferences are partially divergent and partially consistent for different subsets of the set of all possible outcomes.

According to Brehmer (1976), when a subject perceives high interpersonal policy error with a counterpart, he or she tends to ask more questions to discover what that counterpart is doing. Brehmer interpreted this phenomenon as being dysfunctional since the random error obscures the true nature of the disagreement. However, it seems very likely that in some cases an incentive to probe cognitive differences may in fact be functional.

all else equal, team members whose recommendations are uncorrelated

as a unit than do team members whose recommendations are

Although a prediscussion disagreement appears to stimulate the

quality of group decision making, this positive effect breaks down

(1998) showed that, compared with a control condition in which no conflict was induced, participants were more flexible in their

thinking and more creative in their problem solutions when they

anticipated a cooperative negotiation (low conflict) with another

these effects in terms of cognitive load—as conflict intensifies

So, from the above overall discussion, some similarities and differences can be found between work and study group, which described bellows are:

There are some similarities between work group and study group. Firstly, they considered as a group whether they are formal or informal.  Secondly, they both group work for a particular purpose. Work group measure effectiveness directly by their influence on others (e.g. financial performance indicator) on the other hand, study group measure effectiveness directly by their good performance. Thirdly, the both group members are concern about their performance as it is related to their self achievement.

Both group can follow nominal group technique (NGT) which means group members follow a generate discussion-vote cycle to reach an appropriate decision and where brain storming is used primarily to generate alternatives (Moorhead, G. & Griffin, R. W. 1998, p. 431). This idea helps to overcome the negative effects of power and status differences among group members. As well as this idea can be used to explore different types of ideas to generate alternatives. This technique is good for work group to avoid cognitive and goal conflict in decision making.

Both group need to be more negotiate to avoid conflict in decision making. Study group can select a leader by vote or they can ask their supervisor to select a leader for their group so that with all of their opinion leader can take a particular decision.

To avoid conflict or misbehaviour in group regard on decision making,  a  positive group context can be developed, a situation in which group members perceive the presence of encouraging work conditions that enhance their attitudes which can include helping behaviour, group cohesiveness, peer leadership, and cooperation in completing work requirements (Kidwell, R. E. & Valentine, S. R., 2009 ).

According to social learning theory (Bandura, 1977), individuals working with others observe their behaviour and may adopt co-workers as role models and engage in similar behaviour. All members in group are not easy going, so difficult members can adopt other member’s attitude to avoid conflict in decision making.

Research has showed that teams made better decisions when pre-discussion preferences are in disagreement rather than agreement (Schulz-Hardt, Mayer, and Frey, 2002).

So last of all it can be said that group decision is more effective than individual decision. In group decision there are so many options to get an effective solution. Also in group there is possibility of internal conflict in decision making as the members of the group are from different background with different personality. So it is important to develop a positive group context which can enhance optimistic impact on reducing group members’ misbehaviour in decision making.

Amason, A. C. (1996). Distinguishing the effects of functional and dysfunctional

Brehmer, B. (1976). Social judgment theory and the analysis of interpersonal conflict,

performance in groups and organizations.

and improvement of experienced inequality, Journal of Personality and social psychology, 35, 108-119.

Hanham, J. (2008). Relationships between self-processes and group processes with

friends and acquaintances, Issues In Educational Research, 18(2). Retrieved from, http://www.iier.org.au/iier18/hanham.html, accessed on 7Aril, 2010.

and Organizational Misbehaviour: The Case of Withholding Job Effort, Journal of Business Ethics, 86, 15–28.

Cited in: Amason, A. C. (1996). Distinguishing the effects of functional and

Rahim, M. A. (1983). Measurement of Organisational Conflict, Journal of General