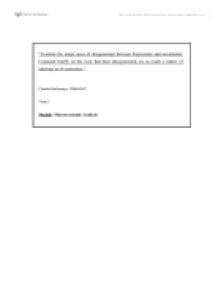 &quot;Examine the major areas of disagreement between Keynesians and monetarists. Comment briefly on the view that their disagreements are as much a matter of ideology as of economics.&quot;

"Examine the major areas of disagreement between Keynesians and monetarists. Comment briefly on the view that their disagreements are as much a matter of ideology as of economics." Claudia Hafenmayr, 020664947 Term 2 Module: Macroeconomic Analysis The Keynesian Theory was founded by John Mainard Keynes, who published "The General Theory of Employment, Interest and Money" in 1936. During the 1930s the Classical economic theory failed to state the reasons for the economic problems in the great depression. They could not explain why the economy settled into an equilibrium at a high rate of unemployment. While Keynes was convinced that because of imperfect markets a modern economy could be at equilibrium at any rate of unemployment. " [T]he postulates of classical theory are applicable to a special case only and not the general case, the situation which it assumes being a limiting point of the possible positions of equilibrium." (Keynes, 1936, p.6) He concluded that an active fiscal policy is necessary to reduce high rates of unemployment. Throughout the 1960s and 1970s economists started to critique the Keynesian Theory and propounded a theory that stressed the efficiency of the free-market mechanism and the overriding importance of the money supply in economic policy .The monetarist concepts were originated from the Classical economics but they modified some of the Classical views. ...read more.

So at the intersection of the IS-LM curves both markets are in equilibrium. Monetary policy will result in a shift in the LM curve. A increase in the money supply will shift the curve to the right, a decrease to the left. Fiscal policy will shift the IS curve, e.g. a higher government expenditure or lower taxes will shift the curve to the right. In the Keynesian theory the IS curve is vertical as they believe that investment is not interest-elastic. LM curve is upwards sloping because the demand for money is assumed to be interest-elastic. IS r LM Y Y Y� Based on the assumed shapes it is understandable why Keynesian prefer fiscal policy to monetary policy. While a shift to the right of the IS curve will increase Y, a shift in the LM curve will only change the rate of interest. The Monetarists believe on the contrary that LM curve is vertical because money supply is assumed to be not interest-elastic. While the IS curve is downward sloping because they assume that interest rates effect investment. r LM IS Y Y� Y Monetarists favour monetary policy because in their model fiscal policy only changes the interest rate but not the output while monetary policy is able to increase Y. ...read more.

But it depends on the situation which theory is more useful. On the long run it is more realistic to assume a vertical AS-Curve and in the short-run a almost flat AS-Curve. So in that way the disagreements between Keynesians and Monetarists are more a matter of ideology as of economics. It is the same for the IS LM model, in reality neither the IS nor the LM curve is perfectly vertical but have an intermediate shape. As shown in the diagram a combination of fiscal and monetary policy can help to increase the output without increasing the rate of interest. E.g. through a higher government spending (shifts IS to the right, Y+, r+) and a increase in money supply (shifts LM to the right, Y+, r-). r IS LM r* Y� Y�� Y In conclusion it is obvious that Keynesians and Monetarist have very different views about various factors of economy. Because of those underlying concepts they disagree on the best way to stabilise the economy. They also differ in their main aims, while unemployment is the most important problem for the Keynesians, monetarist concentrate on fighting inflation. So besides the aspect of time, the Keynesian theory offers more solutions for an economy in a recession while the monetarist theory contains answers for inflationary problems in boom periods. So on the whole the theories seem rather to complement than to exclude one another. ...read more.