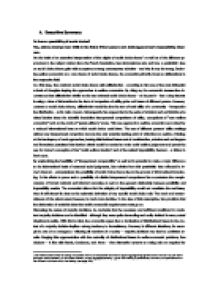 Executive Summary Is there a possibility of social choice? Yes, claims Amartya Sen 1998 in his Nobel Prize Lecture and challenges Arrows impossibility theorem.

A. Executive Summary Is there a possibility of social choice? Yes, claims Amartya Sen 1998 in his Nobel Prize Lecture and challenges Arrow's impossibility theorem. On the basis of an extensive interpretation of the origins of social choice theory1 as well as of the different approaches to the subject matter since the French Revolution, Sen demonstrates why and how a pessimistic view on social choice theory gain wide acceptance among contemporary scholars - and why it may be wrong. Declaring welfare economics as a core theme of social choice theory, the economist primarily focus on deliberations in that respective field. In a first step, Sen confronts social choice theory with utilitarianism - according to him one of the most influential schools of thoughts shaping the approaches to welfare economics. By doing so, the economist stresses the circumstance that utilitarianism similar to the vote-oriented social choice theory - as he puts it - has a deep interest in using a class of information in the form of comparison of utility gains and losses of different person. However, contrary to social choice theory, utilitarianism would declare the sum of total utility of a community - irrespective the distribution - as its main concern. Subsequently Sen argues that in the wake of scholars such as Robbins who raised doubts about the scientific foundation interpersonal comparisons of utility, conceptions of "new welfare economics" such as the credo of "pareto-effiency" arose. ...read more.

Furthermore, an overconcentration on comparisons of mental states would have neglected a plenitude of information that could have inform about the real advantages and disadvantages of different persons, related to their substantive well-being, freedoms, or opportunities. In addition to that, Sen claims that Arrow focused on too much precision in such interpersonal comparisons, ignoring the fact that even partial comparisons can serve to enlighten the reasoned basis of welfare economics, social ethics and responsible politics. B. Evaluation By taking Arrow's impossibility theorem as a starting point, Sen raises substantial questions relating to the substance of social public choice theory as well as the nature of social welfare economics. The economist advances his ideas in a well-structured manner, underpinned by a broad review of literature. In doing so, Sen demonstrates courage to challenge Arrow's well-established theoretical thinking and readopt the early utilitarian's posit of the possibility of interpersonal comparisons. However, differently than the utilitarians (as accused by Sen), Sen's concern is not only in maximizing the total utility but as well in the distribution of that total. By emphasizing the verdict that an impossibility of social choice would imply the impossibility of an orderly and systematic framework for normatively assessing inequality, for evaluating poverty, or for identifying intolerable tyranny and violations of liberty, Sen highlights correctly the great relevance of a possibility of social choices. ...read more.

C. Recommendation It would certainly be the wrong approach to assess the scientific value of Sen's work by only looking at any basic findings in the present lecture. Given the complexity of the treated subject matter as well as the actual occasion of the lecture, such judgments would be misplaced. Sen may fails in producing the required evidence to refute Arrow's impossibility theorem, however, the economist approaches profound questions of welfare economics - a central matter in our understanding of the interaction between the government, the economy, and the society. With this end in view, Sen addresses himself to anyone concerned about social welfare in a strict sense and the well-being of humankind in a wider sense. With that said, Sen's reflections are of great relevance for a wide audience, including (first and foremost) other economists anxious to prove the feasibility of objective interpersonal comparisons, present or future policy-makers engaged in resolving social choice problems, economic leaders taking far-reaching decisions, but also common citizens standing up for a fair distribution of goods. In this context, Sen's lecture should be seen as an unspectacular but solid starting point, defining the scope for further reflections. No doubt, given the significance of social choice theory, we would do well to put more efforts in detecting ways to resolve Arrow's uncomfortable, but persistent theorem. ...read more.